Undefeated cruiserweight prospect Viddal Riley will make his Mayweather Promotions debut on Feb. 28 in Las Vegas against a fighter still to be determined, the fighter told BoxingScene.com.

The 22-year-old British-born boxer signed with Mayweather Promotions in October 2019 after starting his career 3-0 with 2 KOs. He is trained by Jeff Mayweather, Floyd’s Mayweather’s uncle.

Riley last fought in May and has been training YouTubers and content creators mostly since then, much like he has in spurts since 2016. 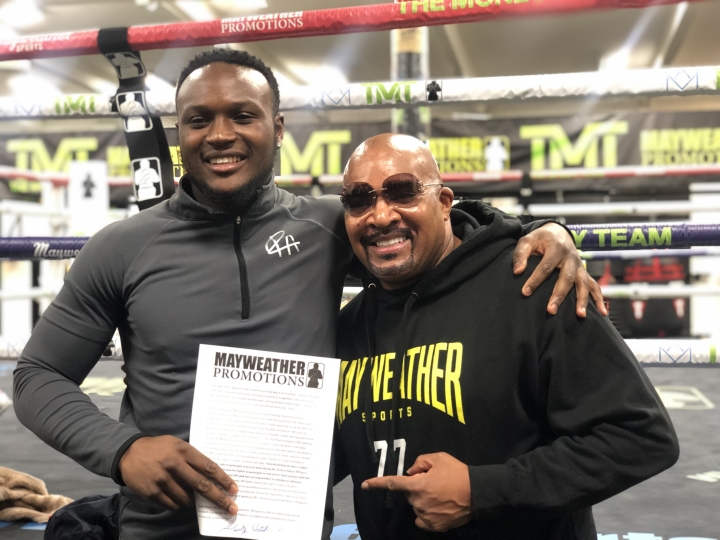 Riley was KSI’s head coach for the November win against Logan Paul. He is also training content creator AnEsonGib for his match against Jake Paul on Jan. 30. Riley says after that fight later this month, he’s done training fighters.

“I never had a passion for coaching until I met these guys,” Riley told BoxingScene.com. “It’s because I know them, love them and care about them. If you’re my friend, I’m not going to let you fight without giving the best advice possible. As my friend, I wouldn’t let them fight without me there.”

Riley has also been recovering from a mild back injury while training AnEsonGib, and as soon as that fight is over, Riley will resume with his own career as a fighter for the February return.

“We’re in the rehab process right now,” said Riley. “I haven't forgotten about myself. I made a little mistake in focusing on KSI, and that I did not check on the little things that were wrong with myself, and keeping my own body in optimal condition for my return. We live and we learn. I’m young. I can make mistakes and come back.”

Riley said his deal with Mayweather Promotions is an “amazing opportunity.” He said that Mayweather has emphasized to Riley to always stay ready.

“Floyd knows that with the platform he’s giving me, I will shine,” said Riley. “What better place to shine than Mayweather Promotions? … It means as much as what I make of it. The whole team is supporting me to the fullest. They believe in what I’m doing in and out of the ring. They see my hustle, and grind. That turns into butts in seats, ticket sales and pay per view buys. A lot of people have to move to heavyweight to make money. I can stay at cruiserweight and make a living because I have a following.”

Riley noted that he doesn’t see himself moving up to the heavyweight division.

“Heavyweights are no longer the size of Evander Holyfield,” he said. “They’re not regular size. They’re big. If I fight someone who’s bigger than me, and nearly as good as me, it’s not good for me, is it? I think what we’re going to see in the next decade is less cruiserweights moving up to heavyweight.”

Don't know who dude is but a YouTube personality that can actual box and brings more attention to cruiserweight can't hurt. Hopefully Floyd doesn't f--k his career up as well.

Well there goes his career.

Felllas, go to Youtube and search "Leg day with Viddal Riley." You're welcome!