Vergil Ortiz: Thurman, Garcia, Porter - They're The Big Three That I Want!

Given how the year has played out, Vergil Ortiz Jr. was willing to accept his rescheduled fight with Samuel Vargas as unfinished business.

Now comes the time to truly satisfy his hunger.

The unbeaten welterweight managed his first fight following a 2019 Prospect of the Year campaign, brutally dismantling Toronto’s Vargas (31-6-2, 14KOs) over seven lopsided rounds Friday evening at Fantasy Springs Resort Casino in Indio, California. The bout was repurposed from pandemic-ruined plans for a March 28 showdown, a time when Ortiz was hoping for another four-fight campaign in this time advancing toward a title fight.

With this fight out of the way, he now has his wish list for future opponents.

“There’s three welterweights out there before I get to a world title—for me the big three. Keith Thurman, Danny Garcia and [Shawn] Porter,” Ortiz (16-0, 16KOs) told a group of reporters during a virtual post-fight press conference. “Those fights are the most logical fights to make.

“They’re not champions right now; they can choose who they fight. I just think those are great fights to make.” 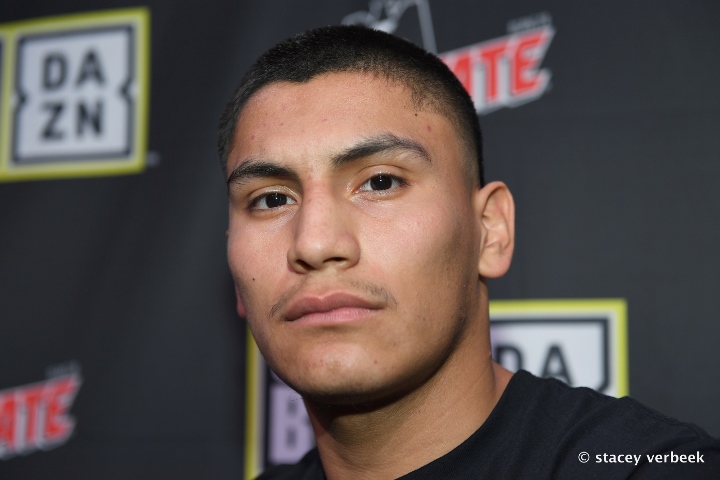 All three mentioned boxers are former welterweight titlists, though the respective status of each is presently unknown. Thurman (29-1, 22KOs), Garcia (36-2, 21KOs) and Porter (30-3-1, 17KOs) all fight under the Premier Boxing Champions (PBC) banner, which has network commitments to Showtime and Fox Sports. None were named among Showtime’s upcoming schedule for the remainder of 2020, while an announcement remains forthcoming for Fox Sports’ second half slate.

The talent pool at welterweight is rich, but not so much when limited to options on DAZN where Ortiz is showcased through his promotional deal with Golden Boy Promotions. Still, network and promotional alliance are not sought as excuses for failing to face the best, with his hopes that the two sides can find a way to mix and match in order to get the 22-year old knockout artist to the next level of his career

He’s even willing to settle for a style that could prove to be uncomfortable.

Current welterweight contender Yordenis Ugas (25-4, 12KOs) is often the odd man out when discussing the best fights at the weight, despite his lofty consensus ranking. As far as Ortiz is concerned, it’s a perfect step-up and the type of fight where he can learn just where he stands in the welterweight title picture.

“Ugas is a very tough fighter,” acknowledges Ortiz. “He’s very talented, I would say he’s a top three or four guy at welterweight even with the champions. I would love that fight. He’s a humble guy. He’s not necessarily a fighter I look up to fighting wise, but the way he carries himself. He’s just classy.”

There’s one fight in particular that he would love to be next, or at least in the near future.

“Thurman is the fight that I’ve wanted for two years,” insists Ortiz. “Some styles they just don’t mesh up, they can be boring, But me and Thurman I think our styles can make for a great fight.”

I think that the only thing that Robert Garcia would have wanted wast to invest more on the body, besides that, it was a near flawless performance against a tested veteran.

[QUOTE=tokon;20676586]No chance that Thurman is next. The other two suggestions are [B]excellent and makeable fights,[/B] although not sure how keen those guys would be to take that work?![/QUOTE]They both would be very happy, because both need a big fight! I…

[QUOTE=Bronx2245;20674144]Not only is this kid humble, he's very intelligent too! His desire to fight Thurman shows that because Thurman would be the perfect step up for him! I would also tell him to consider [B]Mo' Hooker![/B] Both Texas natives, and…

[QUOTE=JakeTheBoxer;20675904]Beating average gatekeeper in S. Vargas makes you believe Ortiz jr. can beat top guys? Really? Ortiz should fight someone like Josesito Lopez, someone who is not afraid to trade hard shots, because he seems a little careless in the…

Garcia should drop off the list. He can gain more from sparing him being they have the same trainer. Just for kicks he should call out crawford and spence. Then watch those two run, hide and cower behind all the…