Vergil Ortiz: Super fight vs Errol Spence will happen in Dallas at 154

Fast rising welterweight prospect Vergil Ortiz (14-0 14 KOs) put on his best performance to date this past Saturday when he stream rolled former title challenger Antonio Orozco (28-2) in 6 rounds in Grand Prairie, Texas on a Golden Boy Promotions' card that was streamed on DAZN.

The 21-year-old put Orozco on the canvas three times in the 6th round to extend his knockout streak to 14 in the pro ranks.

Shortly after the fight Ortiz said that he is working on being more patient in the ring. He said he was able to stay patient after he hurt him in the first time but couldn't hold himself back from going for the kill when he hurt him the second time.

"That aggression came out because I had him hurt. In the beginning I try to pace myself and I did. I just happened to catch him. I seen him hurt the first time from the body shot but I didn't capitalize on it because I was like, 'you know what this dude is a dangerous fighter,' said Ortiz.

"When I hurt him again and I saw him try to shake it off I was like that is it and I got to go for it now. I just got a little over excited but we are going to learn from this. It is only my 14th fight. A lot of world champions right now weren't taking these fights at 14 fights and I am very proud of this." 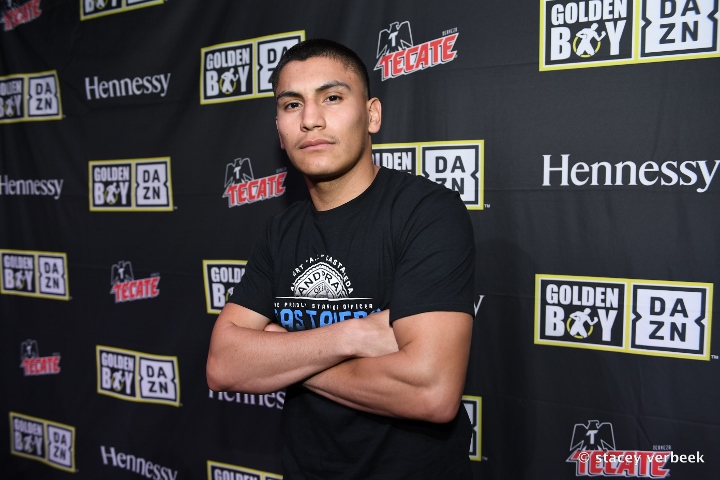 While he is very interested in making the fight come to fruition down the road, Ortiz believes the fight is more likely to happen in the super welterweight division. Spence is a very big welterweight and has stated that it isn't easy for him to make weight.  He also has said that he will be moving up after a few more fights at 147.

"You know what. I don't believe me and Errol will fight at 147. I believe it will happen at 154. You heard me just now, I only have 14 fights. Maybe it will happen when I have 24 or 25 fights. That is a fight waiting to happen. It is definitely a super fight that will happen here in Dallas. A lot of respect to Errol Spence. I grew up with him at the same gym. I am pretty happy he showed up. It just means a lot to me. He used to be my teammate and he is a great fighter," Ortiz revealed.

Vergil Ortiz be better focus on beating caliber contenders and continue to improve than mentioning name of Spence that is light years away from him...

[QUOTE=Sledgeweather17;19986395]Why isn't he with Haymon yet? Smh! Anyway I hope it all works out. I foresee him and Ortiz being the final bosses in the division. I think by the time they challenge for titles Spence and Crawford will have…

Time will tell but spence will still probably beat him.