Vergil Ortiz: I Really Want Antonio Orozco To Test Me!

Vergil Ortiz Jr. didn’t want just any fight for his long-awaited homecoming—nor does he want his adoring fans to go home feeling they didn’t get their money’s worth.

On paper, the unbeaten knockout from Dallas, Texas looks to get his wish in facing former title challenger Antonio Orozco. Their 12-round welterweight clash takes place at Verizon Theatre in nearby Grand Prairie.

“I really want this guy to test me,” Ortiz (13-0, 13KOs) told BoxingScene.com of Saturday’s headliner, which streams live on DAZN. “I’ve never been past five rounds before, so I told my promoter (Golden Boy Promotions) that I wanted someone who will push me to the limit for my next fight.” 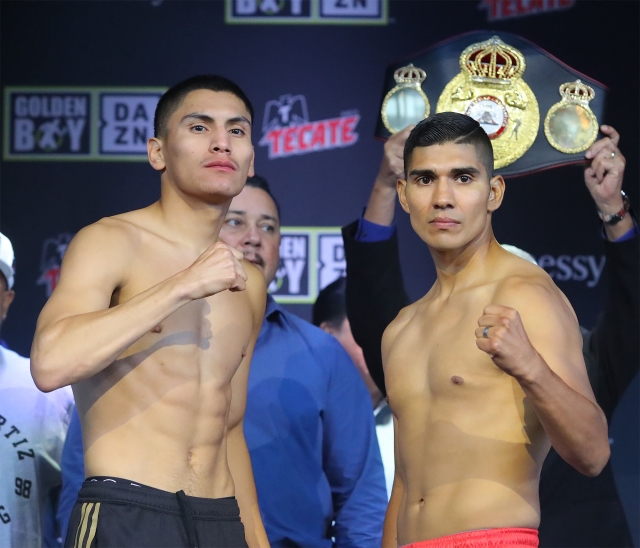 On paper, Orozco (28-1, 17KOs) looks to fit the bill. The 31-year old San Diego all-action slugger has never been stopped through 29 pro fights, with his lone career loss coming at the hands of Jose Ramirez—now a unified titlist—in their title fight last September.

Then again, a similar scouting report came of Ortiz’s last opponent. Mauricio Herrera was supposed to provide the 21-year old with a stiff challenge, but instead was battered into submission inside of three rounds in suffering his first career stoppage loss.

The feat came on the undercard of Saul ‘Canelo’ Alvarez’s 12-round title unification win over Daniel Jacobs this past May at T-Mobile Arena in Las Vegas, Nev. The Cinco de Mayo-themed card featuring the sport’s most bankable attraction couldn’t have provided a grander stage for such a breakout performance.

Only, Ortiz didn’t quite get what he wanted out of the night.

“So the moment I won, suddenly Herrera was this old man (despite only being 30 years old) who was past his prime,” Ortiz noted. “The criticism didn’t bother me; I just use that as motivation to do even better in my next fight.

“But I would’ve liked for the fight to have lasted longer.”

Orozco has insisted to anyone who will listen that he plans to not just extend Ortiz deeper than he’s ever been in his career—beyond the 5th round—but test him like he’s never experienced before, all to the dismay of the local supporters.

Ever the optimist, the rising young contender certainly hopes his opponent honors his word.

“I keep hearing that he’s telling everyone he’s going to take me into the deep waters,” states Ortiz. “Well, metaphorically speaking, I’m a great swimmer. I can handle myself.

Hopefully he means this and doesn't become Victor Ortiz when things get tough. What a nightmare that'd be for Oscar, with his promotional team falling apart.

[QUOTE=indelible;19977004]haha exactly but they kept clamoring so much in that fight of Herrera never being stopped and Ortiz being the first to do it. well yeah the guy is almost 40 geez![/QUOTE] Yup He bought the cap and wore the…

[QUOTE=NachoMan;19977035]Ok, that makes much more sense. He really did seem old in that fight, even at the weigh-in. His eyes just said "I'm here to pay the back rent, hopefully i don't get seriously hurt."[/QUOTE] Lmfao Herrera has been around…

[QUOTE=Cutthroat;19977178]I think he is better than Ramirez, nothing about Ramirez really stands out to me, he just seems like another brawler, but Ortiz, I can see the technique, the power, speed and the size. The thing about Teo is he's…

[QUOTE=Boxing Hero;19977105]Luis Ortiz is already 40 and Wilder brags about fighting him.[/QUOTE] Forty years old is no spring chicken at any weight, but its not the same at HW as it is at WW. Fighting and competing that old at…