Vergil Ortiz emphatically closed out the 2019 Prospect of the Year race.

Ortiz floored Solomon in round four and twice in the ensuing frame, the final of which forced a stoppage at 2:22 of round five.

Blessed with the power to end a fight at any given moment, Ortiz showed off his stellar boxing skills early in the bout. Solomon vowed heading into the fight to make Ortiz miss and then make him pay. Neither scenario at all panned out, as Ortiz worked his jab and followed with punishing right hands. Solomon did his best to play defense, but the lack of return fire was never going to keep his younger and fresher foe at bay. 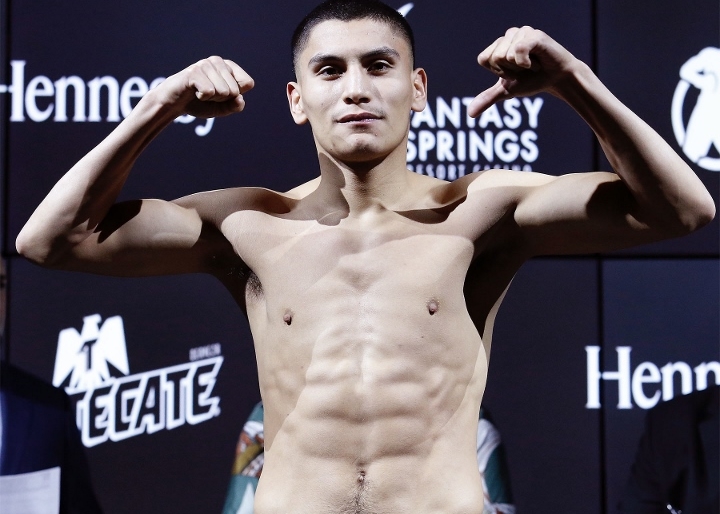 Solomon enjoyed brief success in round three, picking up his own attack and connecting with right hands. Ortiz was still in control but for the first time in the fight forced to simultaneously play offense and defense.

Ortiz applied his ring knowledge extraordinarily well. Solomon (28-2, 9KOs)—who had been out of the ring since last April—had never before been stopped, and his one loss in a tightly contested affair versus Konstantin Ponomarev in their April 2016 battle of unbeaten welterweight prospects. Against Ortiz, his slick skillset was no match, a lesson he would quickly learn in round four.

The first knockdown of the night came late in the frame, although even Ortiz himself acknowledged it could have been been the product of their legs becoming tangled. It wasn’t at all the case in round five, when right hands from an onrushing Ortiz forced Solomon to the canvas after being trapped in the corner.

“I was just trying to figure out how time him,” noted Ortiz.

Solomon beat the count, but was given a long hard look by referee Raul Caiz Sr. upon rising to his feet. Ortiz went on the attack, connecting with consecutive left hooks to the body in forcing Solomon to the deck for the third and final time. This time it was enough to end the fight.

“He let his guard down thinking I was going to chase after him. I did and he went down,” notes Ortiz, who ends 2019 with four knockouts in as many fights.

Friday marks his third straight performance where he picked up a knockout win over an opponent who was never before stopped. It comes three months after Ortiz enjoyed the grandest of homecomings, taking out former title challenger Antonio Orozco this past August in Grand Prairie, Texas. Three months prior came a two-round wipeout of Mauricio Herrera on the undercard of Saul ‘Canelo’ Alvarez’s three-belt middleweight title win over Daniel Jacobs in Las Vegas, Nevada.

The new year will undoubtedly come with Ortiz continuing to headline his own shows, perhaps on a much grander stage. Even in the loaded welterweight division, a title fight could be well within his sights by this time next year.

After all, it would be the natural course of progression for anyone who emerges as the sport’s hottest prospect.

The bout streamed live on DAZN.

Is Ortiz - Boots future superfight at 147? Could be.

[QUOTE=JakeTheBoxer;20259204]I was thinking something. This Ortiz kid probably gives everybody not named Pacquiao a pretty tough fight. Maybe he even beats some of these PBC "stars".[/QUOTE] - -21 years already knocks 1/2 Haymon welts. 22 years he wipes out 7/8.…

I was thinking something. This Ortiz kid probably gives everybody not named Pacquiao a pretty tough fight. Maybe he even beats some of these PBC "stars".

[QUOTE=bigdunny1;20253797]He didn't struggle to make weight. Half the fighters on the entire card missed weight on the first try because of a bad scale. Everyone of the fighters and their camps complained about the scale and every fighter easily made…