Felix Verdejo has wanted to avenge his Olympic loss to Vasiliy Lomachenko since they turned pro in 2012 and 2013, respectively.

Now that Verdejo has re-established himself as a lightweight contender following a technical-knockout loss two years ago, he feels his rematch with Lomachenko has become a realistic possibility again. If Verdejo defeats Will Madera in their 10-round lightweight bout Thursday night in Las Vegas, the Puerto Rican veteran expects to move into position to fight the winner of the highly anticipated Lomachenko-Teofimo Lopez lightweight title unification fight.

“It would be great for me to fight the winner,” Verdejo told BoxingScene.com through a translator. “It would be an honor to fight for the title of either one of them.” 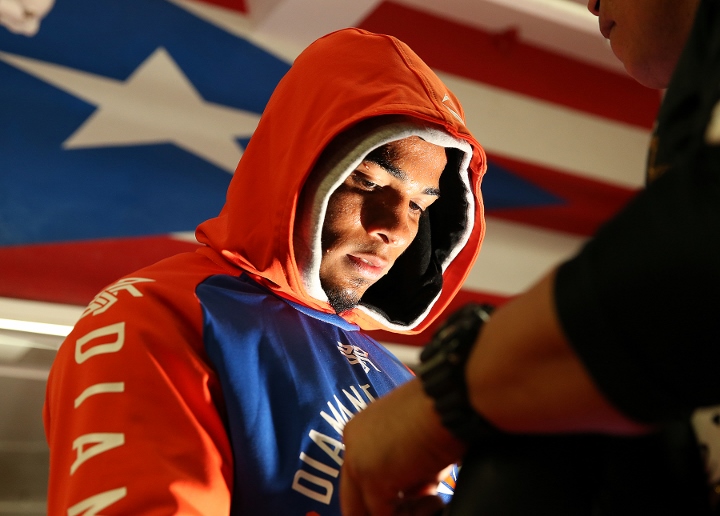 “I think Loma has the experience, he has the ability and he has the angles,” Verdejo said. “But Teofimo has the power, so the fight can depend on that, too. If he catches Loma with a good shot, the fight can be over. For that to happen, it’s gonna be tough because Loma’s style is very difficult, with all the angles. So, it’s gonna be difficult for Teofimo to catch him.”

Lomachenko, 32, and Lopez, 22, were tentatively scheduled to meet May 30 at Madison Square Garden in New York. Once that card was canceled due to the COVID-19 pandemic, Arum eventually expected to stage that ESPN Pay-Per-View event September 19 in Las Vegas.

Lomachenko-Lopez has been pushed back two more weeks, but Verdejo is looking forward to watching it whenever it takes place. If their fight unfolds as Verdejo predicted, the 27-year-old Verdejo hopes it leads to a chance to avenge his 14-9 loss to Lomachenko in the lightweight quarterfinals at the 2012 Summer Olympics in London.

The left-handed Lomachenko went on to win his second Olympic gold medal in London.

“It would be something big for me,” Verdejo said of facing Lomachenko again. “It would be an Olympic rematch, because we faced each other in the 2012 Olympics. And I want to take out that thorn that he gave me in the Olympics.”

The 10-round bout between Verdejo (26-1, 16 KOs) and Madera (15-0-3, 8 KOs), of Albany, New York, will be broadcast by ESPN from MGM Grand Conference Center in Las Vegas. Verdejo has won three straight bouts since Mexico’s Antonio Lozada (40-4-1, 34 KOs) stopped him in the 10th round of their March 2018 bout at Madison Square Garden’s Hulu Theater in New York.

[QUOTE=Rikanlynx86;20657989]Verdejo needs to be more versatile. Ever since his accident he seems to have lost his abilities to throw combinations and variety. He ll throw 2 punches at a time. If nothing hurts his opponent, he then has to deal…

[QUOTE=CPLVS;20657478]Honest suggestion for everyone* when trying to gauge his potential, weighing the twenty-something fights he's looked good in lightly against the four or five he hasn't, the loss being his worst, isn't fair. He hasn't lost to superior competition or…

Honest suggestion for everyone* when trying to gauge his potential, weighing the twenty-something fights he's looked good in lightly against the four or five he hasn't, the loss being his worst, isn't fair. He hasn't lost to superior competition or…

I really like Verdejo...genuinely nice guy....but I'm not inspired by his chances against the best at 135. I'm not seeing it. Nothing in his skill set jumps out for me. Either superb skills or blinding fast punches or huge power....none…