Vazquez: Second Fight With Marquez Is My Favorite, Without A Doubt

Whether or not he is one day elected into the International Boxing Hall of Fame, Israel Vazquez led a career that few boxing fans in this lifetime will ever forget.

The former two-time World junior featherweight champion remains best remembered for his four-fight set with Rafael Marquez (even if most fans choose to only remember their first three). Most observers have a difficult time choosing their favorite fight among their first three meetings in March 2007, August 2007 and March 2008. 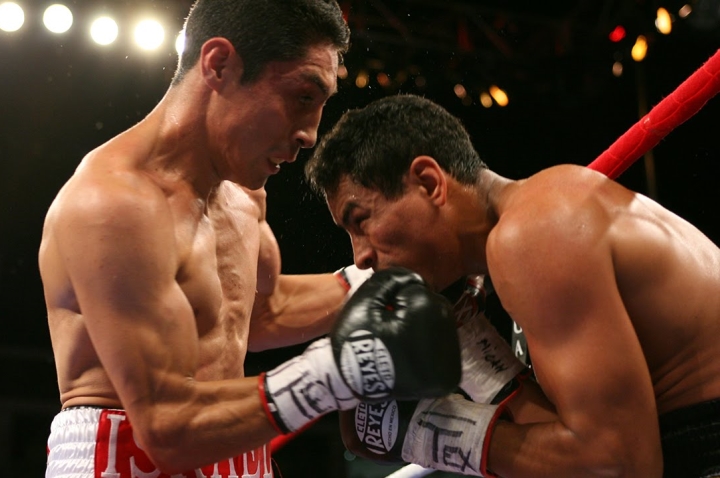 It’s not a particularly difficult decision for at least one of the participants.

“The second fight is my favorite, without a doubt,” Vazquez (44-5, 32KOs) told BoxingScene.com. “I don’t say that just because I won. Even if Rafael won that fight, it was such an intense fight and the crowd was really into it.”

The rematch took place five months after their memorable March 2007 slugfest, in which Vazquez scored an early knockdown but was forced to contend with a busted nose and an oncoming Marquez at Home Depot Center (now Dignity Health Sports Park) in Carson, California. The fight ended after seven rounds, when Vazquez could no longer breathe through his nose and opted to remain in his corner.

Five months was enough to heal those wounds and also take to the coaching style of new trainer Rudy Perez, whom replaced Hall of Fame trainer Freddie Roach.

The August 2007 rematch took place at the intimate Dodge Arena in Hidalgo, Texas, with Vazquez entering as the crowd favorite—the only time in the first three fights despite the original and the rubber match taking place close to his Huntington Park (California) hometown. Vazquez would overcome cuts over both eyes—hardly a new occurrence in his career—to drop and eventually stop Mexico City’s Marquez in the 6th round of a fight which earned 2007’s Fight and Round (3rd round) of the Year.

Part three would also garner multiple honors, including Fight of the Year and along with the fiercely-paced 4th round hailed as 2008 Round of Year. Right alongside it was the 12th and final round, which saw Vazquez score a dramatic last-second knockdown which proved the difference on the scorecards in claiming a split decision win. It was another night where he had to win over the crowd and any remaining skeptics, with mission accomplished on both fronts.

“The [Los Angeles-area] crowd was mostly for Marquez,” Vazquez recalled, though without a hint of resentment. “It seemed more of the crowd was on my side in Hidalgo than when we fought in California.

“But we gave the fans every reason to cheer us both.”

One of boxing’s greatest series Two warriors going at it