AMIR KHAN has been told he is over the hill and his career will come to an end on Saturday.

The Bolton fighter takes on Colombian-born Samuel Vargas in Birmingham as he eyes up a December dust-up against Manny Pacquiao or Kell Brook.

But Vargas has vowed to finish off the former world champion’s career by pulling off a huge upset and handing Khan a fifth defeat. 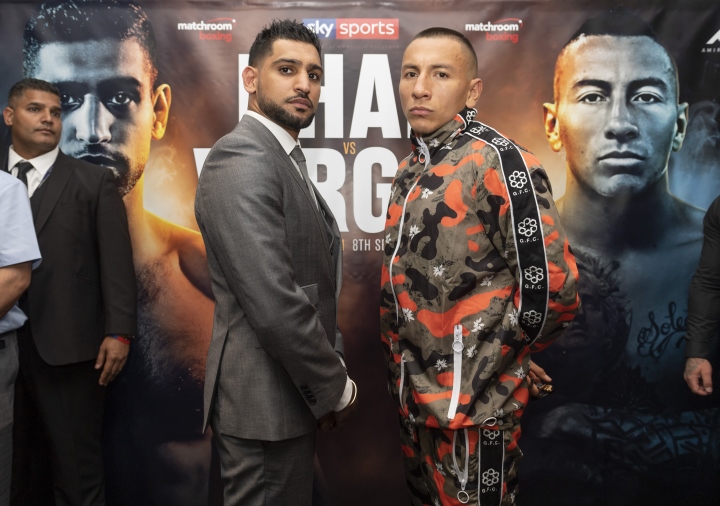 “When I was told about this fight and asked if I wanted it, I said ‘hell yeah, send me the contract,” said rank outsider Vargas.

“Why did I take it? It’s simple because I know I can beat him.

“He has been a great champion, he has been in some great fights but his time has passed.

“This is my time now. It is time for me to put an end to his career and make a name for myself.

“This guy has been knocked out three times, it shows he can go down and it is something I can do.

“I know on Saturday night I will be the villain, the crowd will be booing me but it is just another day for me. They might boo me but in the end I will win so I don’t care if they hate me.”

Khan is expected to easily beat Vargas, who has lost three and drawn two of his 34 fights, to secure a huge money-spinning fight in December.

Talks have taken place about facing ring legend Pacquiao at the Principality Stadium in Cardiff while a clash with British rival Brook is also on the table.

There is also the possibility of a big fight in the Middle East.

Promoter Eddie Hearn wants Khan to look spectacular as he looks to build on his 39-second win over Phil Lo Greco in April.

“If it is a great performance, he has the option to jump into a great fight in December or if it’s a more gruelling fight and he has to wait until February or March, then he can do that.

“He has the option to do whatever he wants, whether he wants the big pay-per-view fight in December or February or if he wants to go out to America instead.

“There’s talk of fighting in Dubai or Abu Dhabi, which are options we are looking at, but it all depends on what Amir wants. The answer will come after Saturday night.”

LOL this whole time I thought he was fighting jesse vargas

Seeing as how Vargas' one semi-decent win is a majority decision over an ancient Ali Funeka, I doubt it. Honestly, Khan's got no business fighting this level of opponent.

Another cherry for King looser.