Vanes Martirosyan: Canelo is a Cheater, Golovkin is a Gentleman

Junior middleweight Vanes Martirosyan made his play for a big opportunity and he landed it.

On May 5th at the StubHub Center in California, Vanes will move up to the middleweight division to challenge IBF, IBO, WBA, WBC middleweight champion Gennady Golovkin in an HBO televised main event.

Vanes replaces Mexican supertar Saul "Canelo" Alvarez, who was forced to withdraw from the contest after testing positive for banned substance clenbuterol back in February. 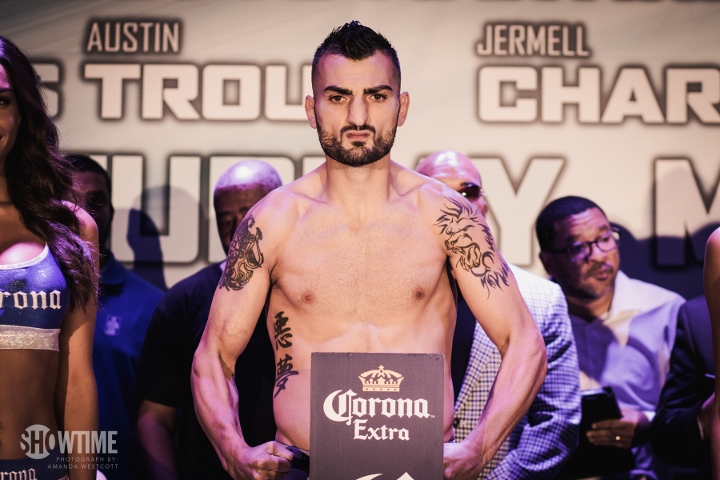 Vanes was preparing to fight in a WBC final eliminator at 154-pounds, but the World Boxing Council was having trouble securing an opponent to face him in the ordered bout.

When the fight with Golovkin came up, Vanes jumped on it.

"I think this is just a great opportunity for me. I've been waiting for this moment. I'm very happy to get this fight. I was born a fighter. That's why I'm fighting. I'm always ready for battle," Vanes said.

Regarding Canelo, Vanes does not believe his claim of eating contaminated meat as the cause for the positive drug tests.

The Armenian boxer would love to teach Canelo a less in the ring. He may get his chance, if he pulls off the huge upset. Canelo, who was handed a six month suspension on Wednesday, will be ready to fight in September and the Golovkin-Vanes winner will be a frontrunner to face him.

"I would punish Alvarez in the ring for what he did. Of course, he's a cheater. Alvarez knows perfectly well what he uses, of course, he is a fraud," Vanes said.

On the side, Vanes has nothing but good things to say about his upcoming opponents.

"As a fighter, Golovkin is a huge force, he has excellent skills. I respect him as a person. I met him a couple of times, he is a real gentleman," Vanes said.

The GGG/Canelo was seen by over 60 million households in Mexico! Canelo Álvarez is more popular than even the president! Ask any Mexican! Canelo is known by 95 percent of the population!

[QUOTE=budfr;18690229]You are wrong, I live in Mexico. Sure, the pure indians may not know about Canelo just like the indians in US reservations don´t know nor care who the phack is Floyd Mayweather, just like in Khazajstan, barely anyone has…

[QUOTE=sterilizer;18690203]WHERE did you get that 95% figure? I bet you just invented it. Many people don't even watch tv or are not interested in sports whatsoever. Many indian, 100% indian (Amerindian) Mexican people don't even own a a TV. Many…

[QUOTE=JohnCastellanos;18688742]Not popular in Mexico??? Canelo is known by 95 percent of the population in Mexico!!! Obviously you don’t known the meaning of popular[/QUOTE] WHERE did you get that 95% figure? I bet you just invented it. Many people don't even…

[QUOTE=Shadoww702;18689832]WBC does dumb sht all the time. Just look at Stiverne...[/QUOTE] They were actively trying to find him an opponent...you think it was beyond him that it was happening? He was just enjoying his retirement while the wbc was lining…