Promoter Eddie Hearn is working behind the scenes to lock down a date for the heavyweight debut of Oleksandr Usyk.

Earlier this week, he made his move in weight official by dropping the WBA title - as the sanctioning body ordered him to make a mandatory defense against Denis Lebedev. 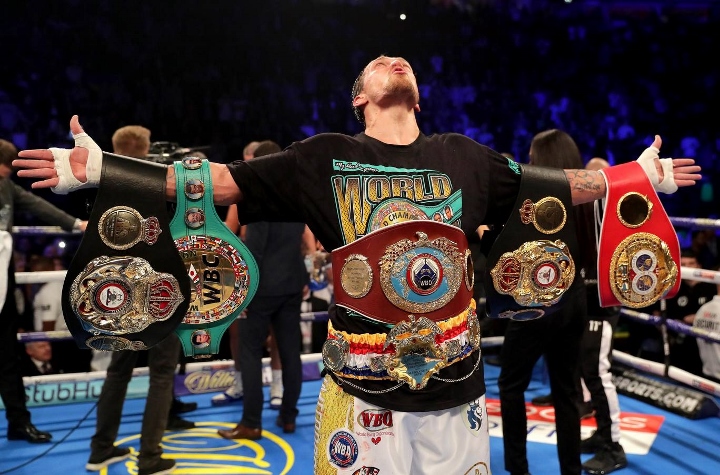 Usyk will make his debut in the heavyweight division against battle tested Carlos Takam.

Takam gave a stiff test to current unified champion Anthony Joshua and former beltholder Joseph Parker. He was battering Dereck Chisora, before the British boxer caught him cold in the second half for a very dramatic knockout win.

Last December, Takam came back in force with a knockout of Senad Gashi at the O2.

Usyk vs. Takam was going to take place on May 18th in Chicago, but now Hearn is moving the date. He doesn't want to go head to head with WBC heavyweight champion Deontay Wilder, who returns on May 18th against Dominic Breazeale at Barclays Center in Brooklyn, New York.

Usyk-Takam will be carried by streaming service DAZN, while Wilder-Breazeale will be televised by Showtime.

Usyk's next fight will now land on May 17 or possibly May 25.

“We’re just sorting out the date, we were going to go for May 18th but now [Deontay] Wilder’s going on that date, we don’t want to clash with that show. We’re just tinkering, May 17th or possibly the 25th. That will all be decided by Monday at the latest.

“It will be heavyweight, it will be Carlos Takam next for Usyk.”

[QUOTE=that g;19634627]anything to trash eddie hearn, i guess...[/QUOTE] Nothing personal, just calling BS whenit's there. He toasted his own bread with the initial Wilder negotiation shenanigans ... completely and ourageously disrespectful ... no matter who the opponenet would have been.…

[QUOTE=MastaBlasta;19623229]LoL @ hearn failing to mention that Usk's people forced them to move the date. They had the Wilder date on the contract intending to try to force viewers to make a choice vs the Wilder/Breazeale fight. Usk's people already…

[QUOTE=ceylon mooney;19624008]me too, but just to take out lebedev.[/QUOTE] Usyk Dorticos would have been a fun fight imo

[QUOTE=AdonisCreed;19622294]I wish Usyk had stayed at cruiser a little longer but oh well. I hope his team knows what they are doing. They may be cashing him out early especially if he fights AJ later this year or early next…