Masterful performance by Oleksandr Usyk, who got stronger and more dominant as the fight progressed. He averaged 21 of 78 punches per round over 12 rounds, while Murat Gassiev was reduced to 8 of 26 per frame. Usyk averaged 29 of 94 over the last six rounds and landed a fight high 47 of 117 in the last round. 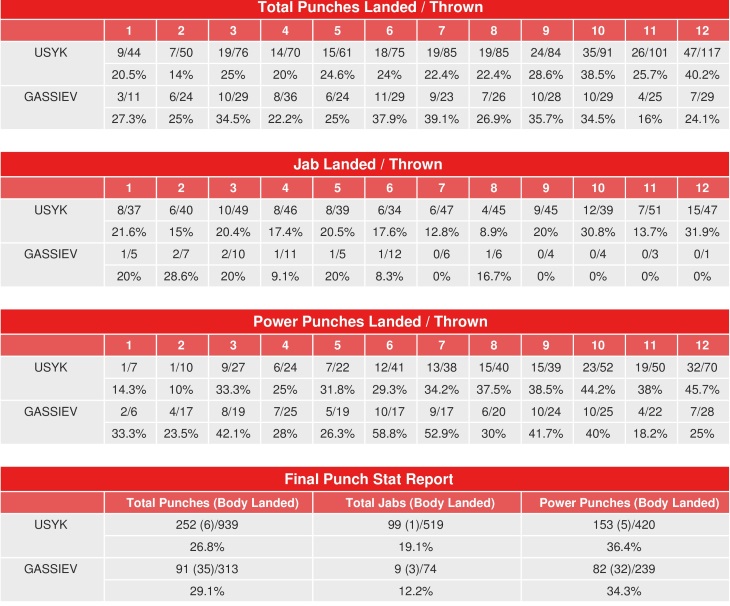 Despite facing a hostile crowd in Moscow, Usyk controlled the fight with his jab to add Gassiev's WBA and IBF titles to his own WBC and WBO belts.

Gassiev landed some heavy body shots when he got inside Usyk's reach, but started to tire and the Ukrainian was utterly dominant in the later rounds as Gassiev swung wild haymakers.

Usyk, a former Olympic gold medalist, holds all four major titles after just 15 professional fights, all of which he won.

That output for a CW is unreal. Dude's got serious stamina.

Usyk was on point this fight. he looked much sharper than when he fought briedis. if he's on like this he'll be hard to beat in any division

I'm not quite following people knocking Usyk's power... How can he possibly load up on his shots considering his shot output. You can't sit on punches and produce that kind of volume, that is nearly impossible. In terms of marked…

[QUOTE=mathed;18958971]Nah, he had Gassiev’s head rocking back like a pez dispenser. He might not have one punch KO power but he puts enough on there to make you respect him. Gassiev had earmuffs on all fight because he was afraid…

[QUOTE=HeadShots;18957564]Usyk has insane stamina because he has very little explosive output. He's like a Cruiser Paulie Malignaggi or someone like Meldrick Taylor. They have a lot of speed but 0 power. 5 of his punches is literally like Gassiev's one.…