Usyk Will Be in Saudi Arabia, Scouting Ruiz vs. Joshua Rematch

According to Eddie Hearn, the co-promoter for Oleksandr Usyk, the undefeated heavyweight contender will be in Saudi Arabia on December 7th, to watch the rematch between Andy Ruiz and Anthony Joshua.

Back in June, Ruiz dropped Joshua four times and stopped him in the seventh round. Ruiz walked away with the WBO, IBO, WBA, IBF world titles.

Usyk is the mandatory challenger under the WBO, which puts him in line for the Ruiz-Joshua winner. 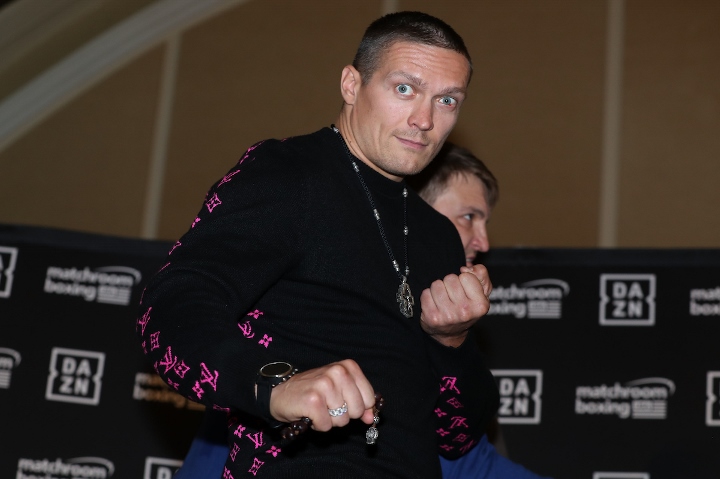 Usyk made his heavyweight debut last week, when he stopped Chazz Witherspoon in seven rounds.

And Usyk has informed Hearn that he wants nothing less than a world title shot up next.

"He will be out in Saudi Arabia to watch that fight," Hearn told Sky Sports.

"The instructions to me are: 'world heavyweight championship next.' It wouldn't hurt to have one more. But they say: 'we have won every belt at cruiserweight, we have had our heavyweight warm-up, we are ready.' My message is straight to the world title."

After his recent win, Usyk made it clear that he's ready for the Ruiz vs. Joshua winner.

"I am ready to fight them. If they are going to [offer] it to me, of course I am going to take it," Usyk said.

Which of the two will come out on top is up for debate.

Hearn recently revealed that Joshua is sparring with Derek Chisora, who faces David Price next week.

"That is great sparring for both," Hearn said. "The difference in this camp is the quality of sparring - replicating Ruiz Jr's style. It is a unique style and not many people can do it. I've seen pictures of Ruiz Jr - he looks lighter but I don't know if they were photo-shopped! There are plenty of hard rounds of sparring to go but AJ is a good place, he's just turned 30."

Ruiz will fu ck him up.

[QUOTE=MDPopescu;20130322]On the contrary -- Usyk will call him out on the spot!... ... But Ruiz will vacate the WBO strap asap and he will fight his stablemate in Wilder... :)[/QUOTE] For the record if Ruiz chooses to unify with Wilder…