The appeal surrounding the unbeaten former World cruiserweight champion has already surpassed expectations with three weeks still to go before his Oct. 12 showdown versus undefeated heavyweight Tyrone Spong. Their bout will stream live on DAZN from DePaul University’s Wintrust Arena in Chicago, Ill.

At this rate, catching it on DAZN might soon become the only option. Fewer than 600 seats remain for the event, with those tickets made available to the general public in efforts to satisfy overwhelming demand. 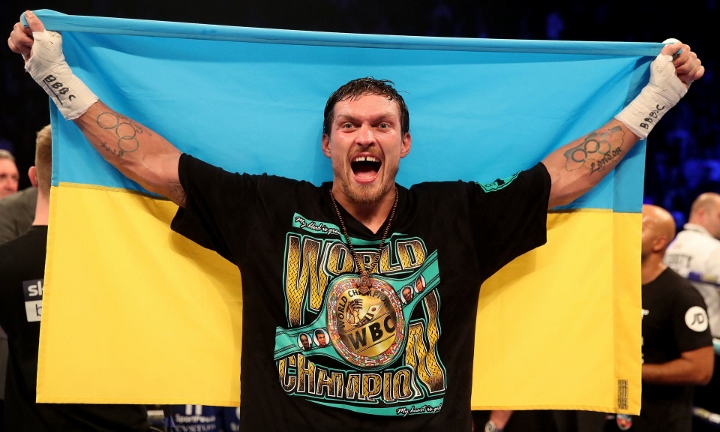 A spokesperson for Matchroom Boxing confirmed that more than 6,000 tickets have been sold for the show, including all floor and lower bowl seats.

The show also includes local attraction and current unified 140-pound titlist Jessica McCaskill (7-2, 3KOs). The 35-year old Chicagoland boxer—fresh off of a thrilling 10-round win over Argentina’s Anahi Sanchez in their all-out war of a unification clash this past May—returns home versus a familiar face, defending her title in a rematch versus Erica Farias, whom McCaskill dethroned in this very venue last October.

Ukraine’s Usyk (16-0, 12KOs) will fight in Chicago for the first time, with the bout marking his third overall in the United States since turning pro in Nov. 2013. The two-time Olympian and 2012 Olympic Gold medalist made his stateside debut in Dec. 2016, scoring a 9th round stoppage of Thabiso Mchunu in the first defense of the cruiserweight title he’d claimed three months prior in Poland. The following April came a competitive but clear 12-round win over then-unbeaten Michael Hunter in Oxon Hill, Md. before traveling the globe for each of his past four contests.

Usyk enters as the 2018 Fighter of the Year, on the strength of becoming the undisputed cruiserweight champion which came courtesy of his winning the World Boxing Super Series cruiserweight tournament with a near-shutout win over then-unbeaten Murat Gassiev last July.

Just one bout has followed since then, an 8th round stoppage of Tony Bellew last November in Manchester, England. Usyk was due to return to Oxon Hill for his 2019 and heavyweight debut in a scheduled clash versus former heavyweight title challenger Carlos Takam. The bout was scrapped after the Ukrainian southpaw suffered a torn biceps and was forced to withdraw.

That led him to Chicago and a new fight date, along with a brand new opponent. He now faces Spong (14-0, 13KOs), a Suriname native who now lives and trains in South Florida. The 34-year old—who scored a 2nd round knockout of Jeyson Minda earlier this month to preserve the date—is best known for his time spent as a kickboxer, a world in which he earned the moniker ‘King of the Ring.’

The same can be said of Usyk, both through his fight night results and now his box office appeal.

[QUOTE=rolshans;20076351]This man just non-ironically said half the arena's comped :rofl:[/QUOTE] It's not that uncommon. Wilder-Stiverne had 4k comps and 4k paid. Ward-Kovalev had 40% comps. A bunch of other fights had similar situations.

[QUOTE=Boxing Goat;20076319]Funny you say that seeing as how my wife is of Mexican descent and my son is half :rofl: I literally love legal Mexicans[/QUOTE] lol alright then

[QUOTE=Bob Haymon;20071852]The arena holds more than 10,000. If this was such a hot ticket then they would've made more tickets available. I doubt there's much interest in Usyk vs. Spongebob. I dont think there's that many Ukranians in Chicago. Assuming…

[QUOTE=wrecksracer;20071379]Last I heard about Texas, it was a mass shooting. You like Mexican food, but not Mexicans[/QUOTE] Funny you say that seeing as how my wife is of Mexican descent and my son is half :rofl: I literally love legal…

[QUOTE=Casualfanforyou;20072598]This is so true, as a Californian, I’ve only visited Portland, Chicago and New York City. My state alone is large and I still have yet to learn everything. Bay Area keeps me happy and has the best food though…