The road to a showdown between Oleksandr Usyk and Alexander Povetkin now includes a detour where both will face opposition previously defeated by their respective counterpart.

Both boxers still plan to fight on the same DAZN show on May 18, but will officially no longer come against one another, BoxingScene.com has learned. Instead, they will take separate bouts at a Chicago location to be determined, as a prelude to a possible pairing later this year.

The fallout stems from a desire on the part of World of Boxing, the Russia-based promotional outfit representing Povetkin (34-2, 24KOs) and whom prefers its heavyweight to instead take an interim fight before a head-on collision with the 2018 Fighter of the Year. 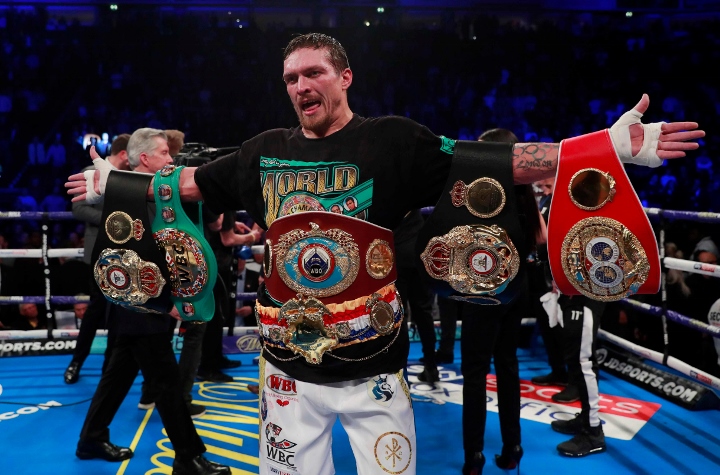 Usyk (16-0, 12KOs) presently reigns as the World cruiserweight king but is on the books for his first fight of 2019 to double as his heavyweight debut. A formal announcement has yet to come, primarily due to the lack of an officially signed opponent.

Promoter Eddie Hearn—who now co-promotes Usyk along with K2 Ukraine in bringing the unbeaten southpaw to DAZN—has suggested to media in his native England of Carlos Takam possibly emerging as a frontrunner to land the assignment.

France’s Takam (36-5-1, 28KOs)—who originally hails from Cameroon—remains a hot commodity in the twighlight of his career in terms of interested heavyweights in search of a high-profile opponent. The 38-year old has historically fallen short at the top level, including back-to-back knockout losses to unbeaten heavyweight titlist Anthony Joshua and longtime contender Dereck Chisora in back-to-back fights in the United Kingdom.

The Oct. ‘17 loss to Joshua marks Takam’s lone career title fight, as well as the first of three straight fights in the UK. The closest he’d previously come to fighting at that level came in his landing on the very wrong end of a highlight reel 10th round knockout at the hands of Povetkin in their Oct. ’14 clash on the road in Moscow, Russia.

Interestingly, the well-traveled Takam would be making his U.S. debut should he land the assignment versus Usyk, who also knows a thing or two about hitting the road.

The unbeaten Ukrainian southpaw earned recognition as undisputed champion following a 12-round virtual shutout of previously unbeaten Murat Gassiev last July in his opponent’s native Russia. The win earned him the World cruiserweight championship (in addition to owning the WBC, WBA, IBF and WBO straps) as well as top honors in the inaugural World Boxing Super Series cruiserweight tournament.

Usyk—who’d begun his 2018 campaign in Riga, Latvia with a 12-round win over the region’s favorite son in previously unbeaten Mairis Briedis—closed out the year with a rousing 8th round knockout of former titlist Tony Bellew last November. The bout played to a sold-out crowd in Manchester, England, his 7th consecutive bout away from his native Ukraine.

The entirety of that stretch consists of his cruiserweight title run, beginning with a 12-round win over previously unbeaten Krzysztof Glowacki to dethrone the reigning titlist on the road in Poland. Of his six title defenses, just one—a Dec. ’16 9th round stoppage of South Africa’s Thabiso Mchunu in Inglewood, Calif.—took place on neutral soil.

One of the road trips also marked his last appearance in the U.S., which came in an April ’17 decision win over previously unbeaten Michael Hunter, a 2012 U.S. Olympian who has suddenly emerged as the most likely candidate to next face Povetkin.

The 30-year old—who now lives and trains in Las Vegas—moved up from cruiserweight following the aforementioned loss to Usyk. Four straight wins have followed in the heavyweight division, including a one-sided 9th round knockout of fringe contender Alexander Ustinov last November in Monte Carlo.

As for Povetkin, Russia’s 2004 Olympic Gold medalist and former secondary titlist remains on course for his U.S. debut, even if not against Usyk.

The bulk of his early career took place in Germany under the Sauerland Event banner, before enjoying a local following in Russia after joining World of Boxing in 2013. His biggest event to date also resulted in his first loss, as then-World heavyweight king Wladimir Klitschko scored a landslide decision win in their Oct. ’13 championship clash in Moscow.

All but three career bouts having taken place in either of those two countries, having fought once in Finland and his last two bouts taking place in the United Kingdom. The latter of his two marked his most recent piece of ring action, causing early chaos versus Joshua before suffering a 7th round knockout last September in London, England.

The bout marked the official launch of sports streaming service DAZN USA, which will carry the May 18 event. Presumably, the platform would also house a clash between Usyk and Povektin, should they win their next bouts and manage to come to terms for such a bout.

[QUOTE=DuckAdonis;19563276]So Hunter vs Povetkin and Usyk vs Takam?[/QUOTE] Wouldn’t surprise me if Hunter beats Povetkin’s old ass. And I don’t want to see Usyk/Hunter II

Takam then Cojanu then AJ.

Usyk-Takam is a not a bad fight considering the clash of styles. Of War and Boxing