Usyk: If They Offer Ruiz-Joshua Winner - I'm Ready To Take It!

On Saturday night at the Wintrust Arena in Chicago, Usyk stopped division veteran Chazz Witherspoon after seven rounds of action.

Witherspoon (38-4) took the fight on late notice after original opponent, Tyrone Spong, was pulled from the contest after testing positive for a banned substance earlier this week.

The heavyweight veteran tried his best, but by the end of the seventh round he was way too exhausted to continue any further, and quit on his stool. 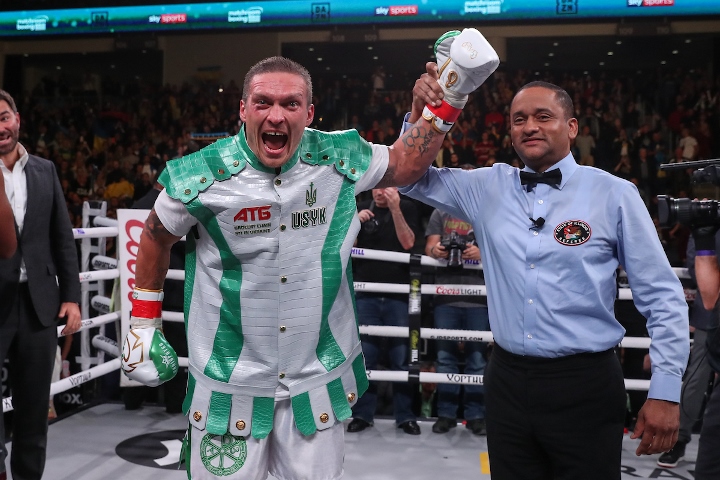 Usyk's victory was not exactly the dominating performance that many had expected.

While he never specified, Usyk explained that he was mentally distracted.

"I was waiting for this moment, we had some little difficulties because we have to change opponents. I didn’t show to nobody but I had some bad thoughts float into my head. I just prayed a little bit, I asked [God] to help me and it looks like he helped me," Usyk said.

“Yes, there is a little bit of difference [fighting at this new weight] but I used to fight as a heavyweight. But yes, it was different. I did what my trainer told me to do. I just follow their orders and that was to box. And I did box but if I had the opportunity [to get a knockout], I would take that opportunity.”

Despite his performance, Usyk believes that he's ready for Anthony Joshua, Andy Ruiz or Deontay Wilder.

Usyk is the WBO's mandatory challenger - which places him directly in line to fight the Anthony Joshua-Andy Ruiz winner. The Joshua-Ruiz rematch - with the WBO, WBA, IBF, IBO world titles at stake - takes place on December 7th in Saudi Arabia.

Usyk poses no threat unless he goes slowly. If he rushes into Top 4 dogs without 2-3 more fights, he is eliminated.

[QUOTE=MrShakeAndBake;20120697]USYK is a phukin’ Gangsta! He might lack of power and size, but his boxing skills, feet movement is going to bring problems for allot of heavies. If the man wants to fight for the belt, let him fight.[/QUOTE] i…

[QUOTE=pugil1st;20121546]This guy is not doing that to AJ. It's not in his DNA. Comparing him to Ruiz who's style is to come forward and throw power shots is a really bad comparison.[/QUOTE] Andy Ruiz isn't a big puncher and doesn't…

[QUOTE=Jkp;20121488]Andy Ruiz doesnt have KO power either, and he destroyed AJ.[/QUOTE] This guy is not doing that to AJ. It's not in his DNA. Comparing him to Ruiz who's style is to come forward and throw power shots is a…