Trends in sports can be coincidental but they’re hard to ignore.

For all the talk about A side this, and split that, the best in boxing are never just businessmen. They make a living now, as all professional athletes do, at a trade they once pursued for free.

They are always competitors too.

Following his masterful victory over Patrick Teixeira to win the WBO belt at Jr. middleweight, Brian Castano (17-0-1, 12 KO) could have gone with the standard, “whatever my team decides” bit. As reported here by Elisinio Castillo, Castano is saying one name explicitly.

That name is the only other name that matters in the title scene at 154 lbs.

Before 2021 is over, the chances we see a four belt unification between Castano and lineal king Jermell Charlo (34-1, 18 KO) are good. Both men fight under the PBC umbrella and, more important, both seem to want it.

They aren’t the only ones.

Three or now four-belt unifications aren’t necessary to define who the champion of a class is. Bernard Hopkins was proven history’s king at middleweight several years before he knocked out Oscar De La Hoya. Several lineal kings, including the great Lennox Lewis, have had multiple belts, whittled down to one, and remained the man.

Still, in an era where the WBA alone can have three guys running around paying them fees to be called ‘champ,’ unification often carries with it a quality seal. Even if you aren’t seeing the two best in their class on a given night, you’re usually at least safe in the knowledge that you’re seeing two of the real top ten locking horns. To win all four belts, especially if starting with just one, is a stamp of multiple such tests.

It’s part of what made Oleksandr Usyk’s run at cruiserweight so impressive. It took three fights to win his four belts. All three of the men he beat (Krzysztof Glowacki, Mairis Briedis, and Murat Gassiev) were all consensus top five opponents. The wins would have been just as impressive without the belts...but the trophy case added extra flair to it all. It made anyone’s else’s claim to the throne silly.

Usyk earned his status as the rare guy to all but clean out his class. 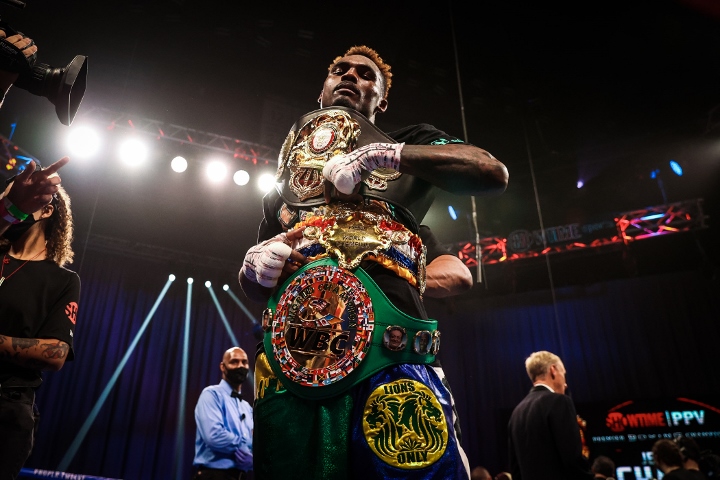 It took over fifteen years after the birth of the WBO in 1988 for Hopkins to be the first man to win and hold the WBA, WBC, IBF, and WBO belts at the same time. He lost all four straps to Jermain Taylor and more than a decade after that their club was joined by Terence Crawford at Jr. welterweight and Usyk.

Depending on how one views the WBC’s franchise title, and the WBC’s take has been confusing, one could also add Teofimo Lopez. A Lopez-Devin Haney clash would clear up any debate on the matter.

Regardless, that’s a short list over a span of 31 years on the men’s side of the sport. Claressa Shields, Cecilia Braekhus, Jessica McCaskill, and Katie Taylor have done it on the women’s side in the last decade or so, with Shields soon aiming to do it again at Jr. middleweight in a unification on March 5th with Marie Dicare. If she does, she’ll be the first professional boxer, man or woman, to four-belt two different divisions.

If trends stay the direction they’re pointed, the number of men to pull off the feat could nearly double by the end of the year. Signs point to a Jr. welterweight clash between Josh Taylor and Jose Ramirez in the spring. The same season could, and likely will, bring us three-belt unifications at super middleweight (Saul Alvarez-Billy Joe Saunders) and welterweight (Errol Spence-Yordenis Ugas).

If Alvarez wins, his stated intention of unifying his division would put Caleb Plant in his crosshairs. Even if Alvarez-Plant wasn’t next after Saunders, it would still fit into a planned four-fight schedule for Alvarez this year.

Spence-Ugas isn’t signed as yet but with both under the PBC umbrella it’s certainly makeable and being openly considered. The fight the most people seem to want to see at welterweight not involving Manny Pacquiao is Spence-Crawford. If Spence snags a third belt, the competitor in him would surely be unlikely to want to exit 147 lbs. with hardware left to win. It could be even more true with so much unification going on above and below his class.

Then there is the crown where undisputed matters most of all. Boxing fans are still waiting for lineal champion and WBC titlist Tyson Fury versus WBA/IBF/WBO beltholder Anthony Joshua to be formally announced. The true king of boxing, the real best in the world, is a position that deserves just one claimant. Before this year is out, we should know who that is.

There are other unification going on at Jr. bantamweights with Juan Francisco Estrada and Roman Gonzalez set to fight for two straps (and Estrada’s lineal crown) next month and Naoya Inoue still chasing the other two belts at bantamweight. The latter may be more likely to get there in the next few fights but by mid-March we’ll have two men halfway to four below featherweight as well.

So far, Shields-Dicaire is the only four-belt clash signed, sealed, and ready to deliver. More are coming. In a sport where the lie perpetuates that the best don’t fight the best, by the end of the year it could be easier to identify the best in multiple classes then it’s been in a long time.