Tyson Fury is fascinating in so many ways. Some examples: His backstory (overcoming substance abuse and other personal problems), his marketing acumen (Bob Arum said he’s better than the promoters), his athleticism given his height (6 feet, 9 inches) and his perfect record (27-0-1).

Oh, and one more: He’s boring as hell in the ring.

Indeed, Fury has managed to become one of the most-compelling athletes in the world – and a very wealthy man – even though his safety-first style is more likely to put fans asleep than his opponents.

That’s more of an observation than a criticism. His style is his style. And obviously it’s effective. I used to say the same thing about Floyd Mayweather and Andre Ward, two special boxers who too often, in my opinion, served as a cure for insomnia because of the monotony and predictability of most of their fights.

Fury also is a special boxer, at least in relation to other top heavyweights. His ability to use his length, athleticism and ring intelligence make him extremely difficult to beat. Ask Wladimir Klistchko and Wilder. It’s just generally not fun to watch him.

I personally found his coming-out victory over long-reigning champion Klitschko in 2015 to be interesting as it unfolded because I was stunned by what I was witnessing, the domination of a fighter who had been untouchable for so long. I was in the minority, though. Most observers thought the fight was a snooze fest.

I keep hearing how great his first fight with Deontay Wilder was. I found it tedious for eight-plus rounds, with Wilder desperately (by his own admission) trying to score a knockout and Fury adeptly avoiding that fate as neither fighter threw or landed many punches.

That fight became entertaining only after Fury went down in the ninth round and then, in the 12th, somehow got to his feet after crashing to the canvas from a huge right-left combination that seemed at the moment would end the fight. In other words, the most interesting thing Fury did that night was get up. 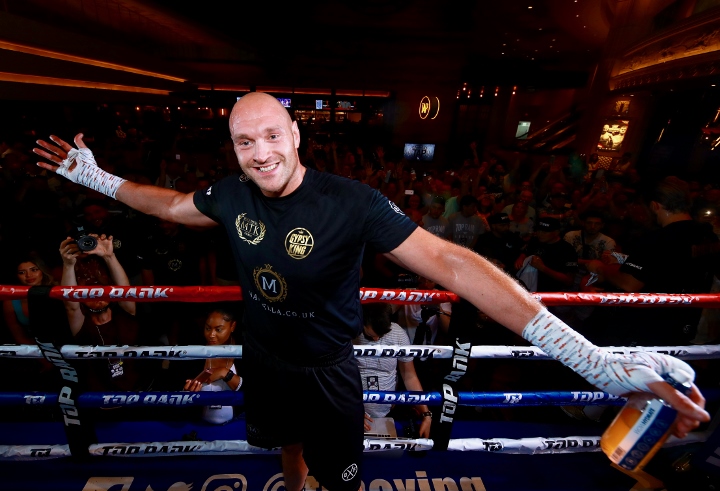 That shouldn’t be minimized. Fury’s ability to survive those punches allowed him to hear the final bell and ultimately walk away with a disputed draw. Again, though, until those knockdowns, the fight was mildly interesting at best.

And that’s OK. Fury’s appeal lies more in who he is than what he does in terms of boxing, although none of it would work if he wasn’t so successful in the ring.

Fury is a tour de force because of his charisma, which allows him to captivate an audience on stage or in front of a camera. He’s truly funny, which is unusual. He’s candid. His willingness to discuss the battles with his demons reveal his humanity. He’s astute about boxing and the boxing business. And, perhaps most important, he’s charming.

It’s no wonder Arum compared him to two of his most-famous fighters.

“The two guys Tyson reminds me of are Muhammad Ali and George Foreman,” Arum said. “They were people persons first. They’d talk directly to the people, over the head of the writers, right to the people. Tyson’s going to lead this sport into a new dimension, just the way Ali did in his time, and then later George.”

Ali and Foreman were both better fighters and more fun to watch than Fury. And, of course, no one could compete with Ali in the charisma department, not even the amusing second incarnation Foreman. That said, I think Arum is right.

Fury’s way with people has been the key factor in his rise to stardom, this in spite of nasty comments he made before his hiatus from the sport that got him into trouble with British boxing authorities. And he will continue to grow in stature as a result of the charm offensive – as long as he wins fights.

He should have no trouble with unbeaten, but untested Tom Schwarz on Saturday in Las Vegas, his first fight for Arum and ESPN. A legitimate test should come early next year, when he is tentatively scheduled to fight Wilder a second time.

If Fury can beat Wilder – and the fight certainly is winnable given what we saw in their first meeting – he would become the undisputed No. 1 figure in the sport.

And the rematch doesn’t have to be particularly exciting for him reach those heights. Fury will stay true to his style, using his reach and feet in an effort to keep Wilder at a safe distance while throwing just enough punches to win rounds. It won’t be thrilling to witness but it could very well be effective.

That’s who Tyson Fury is in the ring, just as he is a bigger-than-life figure outside it. He stays true to himself. And it works.

[QUOTE=tokon;19837420]You seem a little overly sensitive about that. Apologies if I touched a nerve[/QUOTE] Nah, i'm just laughing at how pathetic you are.

[QUOTE=denium;19835805]Cry some more, loser.[/QUOTE] You seem a little overly sensitive about that. Apologies if I touched a nerve

[QUOTE=komandante;19831719]I support Tyson Fury because of his faith in God.[/QUOTE] Amen brother.

[QUOTE=tokon;19835796][B][/B] No he lost it when he failed the drug test and got banned and he has not won it back "in the ring" either! Maybe ask UKAD if he was tested whilst losing all that weight; I'd be surprised…