Tyson Fury To Wilder, Joshua: I Call The Shots, It's My Show Now!

The former IBF, WBA, IBO and WBO champion and his promoter Frank Warren announced the deal, said to be worth £80 million, on Monday.

His fights will now be shown on ESPN in the United States, while BT Sport will continue to broadcast his bouts in the United Kingdom. 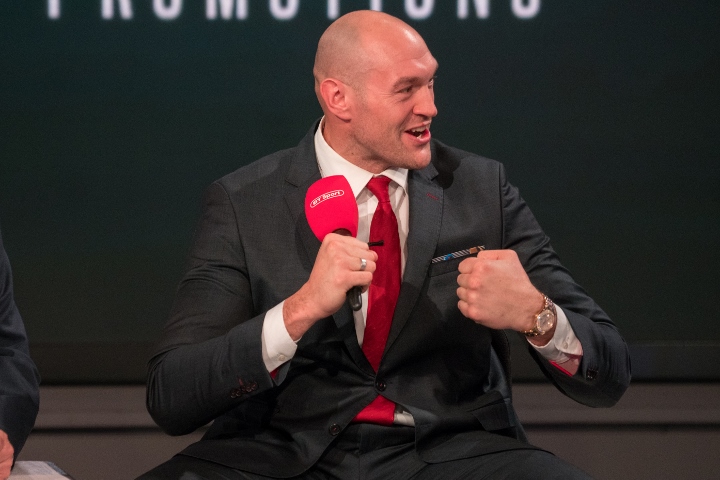 The news will cast doubt over a potential rematch with WBC champion Deontay Wilder, who has a deal with Showtime, while any future domestic dust-up between Fury and Anthony Joshua may also be complicated due to the latter's contract with streaming service DAZN. Now all three of the sport's top heavyweights are aligned with rival networks.

However, Fury is confident the announcement will not stop an agreement being reached with Wilder for a second meeting between the pair.

"It's the Tyson Fury show now. I've got the biggest TV platform in the world. I call the shots. I still want the biggest fights and that includes Wilder and Joshua," Fury said.

Fury's co-promoter, Frank Warren, added. 'The lineal champion is now in the No 1 position and getting everything he wants.

"ESPN have almost 3 million subscribers and BT here and he has the respect he deserves both sides of the Atlantic... the game has changed dramatically... Showtime are no longer the only show in town for Wilder now that ESPN are in the field. That will involve a lot more discussion.

"As for Joshua, we wanted that also but they didn't... Now they will have to come to us."

Fury is looking at three fights this year and added: "After all the hard work I could fight so I want the first no later than May. I will fight whoever is put in front of me."

[QUOTE=BoxOfficer;19523846]You don't sound like someone who watched the fight. If you did, I don't think you've seen a replay. I have had the benefit of seeing the fight countless times, and most of those times, I watched to score. I…

[QUOTE=Bjl12;19523874]Fury won the fight. Period. The fact that you defend any of this nonsense says more about you, your biases, and inability to score a fight than anything else[/QUOTE] The problem with your answer is typical, we all think we…

[QUOTE=STREET CLEANER;19521925]If Fury beats Wilder in dominant fashion the fight against AJ will be extremely lucrative.[/QUOTE] You think they're gonna give him all that money and then let him in with AJ? No chance. AJ will destroy him and greatly…

[QUOTE=Tonyu;19523663]I did explain Wilder only needed 3 more rounds on top of the 2 knock downs which he did. Fury didn't take all 10. That's why I'm glad the average boxing fan doesn't score. A draw was the correct outcome…