Tyson Fury Weighs In at 258 Pounds For Francesco Pianeta Fight

With a shouting Deontay Wilder standing nearby, Tyson Fury continued to display Friday just how seriously he has taken his comeback.

The 6-feet-9 Fury stepped on the British Boxing Board of Control’s scale at 258 pounds for his fight Saturday night against Francesco Pianeta. That’s 18 pounds lighter than the former heavyweight champion was when he weighed in two months ago (276) for his technical knockout of Sefer Seferi on June 9 in Manchester, England.

England’s Fury reportedly blew up to nearly 400 pounds at the worst point of his 2½-year layoff, when he battled addiction and mental health issues. Italy’s Pianeta (35-4-1, 20 KOs), a 6-feet-5 southpaw, weighed 254½ pounds Friday at the Europa Hotel in Belfast, Northern Ireland. 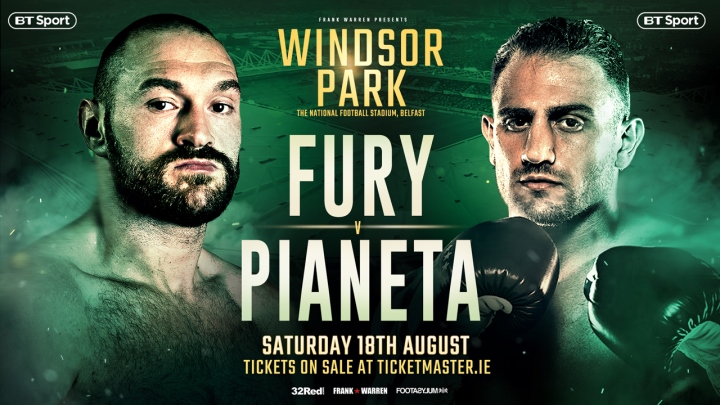 If the heavily favored Fury wins their scheduled 10-rounder Saturday night at Windsor Park in Belfast, he is expected to challenge Wilder for the WBC heavyweight title in November in Las Vegas. Frank Warren, Fury’s promoter, has said a deal is essentially done for Fury to face Wilder (40-0, 39 KOs).

The 30-year-old Fury is considered boxing’s lineal heavyweight champion because he hasn’t been beaten since he upset Wladimir Klitschko in November 2015. Fury weighed in at 247 pounds when he out-boxed Ukraine’s Klitschko to win a unanimous decision and captured the IBF, IBO, WBA and WBO titles in Dusseldorf, Germany.

Once Fury and Pianeta weighed in Friday afternoon, Carl Frampton and Luke Jackson both made weight for the main event Saturday night.

BT Sport will televise the Frampton-Jackson and Fury-Pianeta bouts in the United Kingdom. Showtime also will stream those two bouts on its YouTube channel (3:30 p.m. ET/12:30 p.m. PT).

Just bought a 65 inch top of the line Samsung. Can’t wait to watch this fight. Actually the first fight is about to start and the picture on this set is immaculate. Never seen such a perfect picture on a…

No. Roadwork was the way all past greats got into perfect fighting trim. He looks ridiculously fat right now. Get on the road and get to work.

I hope this Pianeta character does enough to make the fat gangly pikey to stop fackin around like we’re impress and fight. He did that with the big klit and the last fellah, it’s not boxing and he should be…

He should loose another 15 pounds and then put 10 pounds of muscles on.

[QUOTE=Armchairhero;19029317]I very much doubt hrs of daily running would be beneficial to a 6’9 giant, knees and ankles would be ground to dust[/QUOTE] he could do swimming. wilder does that but i think its mostly because he doesn't have the…