Tyson Fury Warns: If Yarde Can't Beat Kovalev, His Career is Over!

Kovalev, at 36-years-old, is viewed as being near the final chapter of his career.

And Yarde is the young puncher on the way up, hoping to finally cross over with a huge win over the division ruler. 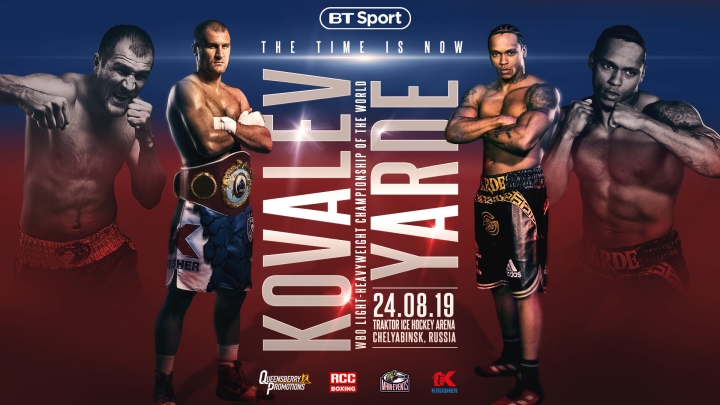 Fury captured heavyweight gold in November 2015, when he traveled to Germany to unseat the heavily favored champion, Wladimir Klitschko.

Now Yarde has to accomplish the same task.

But, he feels the career of Yarde could very well be over in defeat.

"It'll only make his career better when he wins. I've been on the road, I've been to Germany, America, I've been all over; Canada, Ireland. If you're any good you'll win; if you're not, you'll lose. Home advantage means nothing to me but it does to a lot of people because they're not natural fighting men," Fury told BT Sport.

"Some people can't fight off their own soil, me, I can fight anywhere because it's bred in me. I can fight on a cruise ship or in a swimming pool if it was emptied out. But that's me, and we're going to see what Anthony Yarde is made of. I think he'll do it.

"And I think if he can't beat Kovalev then he should forget about it because where is he going? I'm not saying Kovalev is useless but a good younger man should beat a good older one. I believe he'll do it and that he'll be a good little champion."

As previously reported, Fury believes Yarde will get the job done.

"I fancy Anthony Yarde, I really do. I think Kovalev is on the slide, he's been a very good world champion in his time and he's done very well, but i think the Andre Ward losses have beat the sh*t out of him really," Fury said.

"He lost the fight to [Eleider] Alvarez then came back to beat him but I think a young man will always beat an older one and that's my motto. I fancy Anthony Yarde to knock him out, not just beat him on points, but stop him, because thats what he'll have to do in Russia."

This is nonsense. Yarde has nothing to lose except an unbeaten record which doesn't mean much relative to the opponents he's been in with. If he puts up a good showing and loses then his stock will rise. Fury talks…

[QUOTE=apollocreed;19997785]I was looking through Kov's boxrec to remind myself of his resume - he doesn't really have many notable names. Hopkins is actually his best win, followed by Pascal. After that I'd probably say it was Alvarez. He's actually fought…

[QUOTE=Elvelozpotosino;19997199]Being that Canelo was the smaller fighter coming up.. wouldn't GGG had the task to stop Canelo ?[/QUOTE] I dont think so. Just because a guy came up doesnt mean the other guy has to ko him. Both guys start…

[QUOTE=Corelone;19996800]If Yarde loses bad, it will affect his career. He doesn't have a lot to fall back on. If he loses in a questionable or robbery type decision, maybe not, but if he doesn't wobble or drop Kovalev, he's going…

[QUOTE=OnlyBeingHonest;19996752]Question (maybe, future thread topic): why is GGG a future HOFer (most experts opinion), yet Kov is classified as likely borderline HOFer. Personally I thought Kov had a better pro career by far (competition wise, not earnings). Do you think…