Scaling 18 pounds lighter than in his first comeback fight two months earlier, Tyson Fury's improved hand and foot speed enabled him to easily out-speed and out-box the plodding Francesco Pianeta, who offered precious little resistance as he landed just 37 punches in 10 rounds and never more than 6 in any round.

Fury went to the body effectively, as 45% of his landed punches were to the flanks of the statuesque Pianeta (compubox avg.: 24.3%). 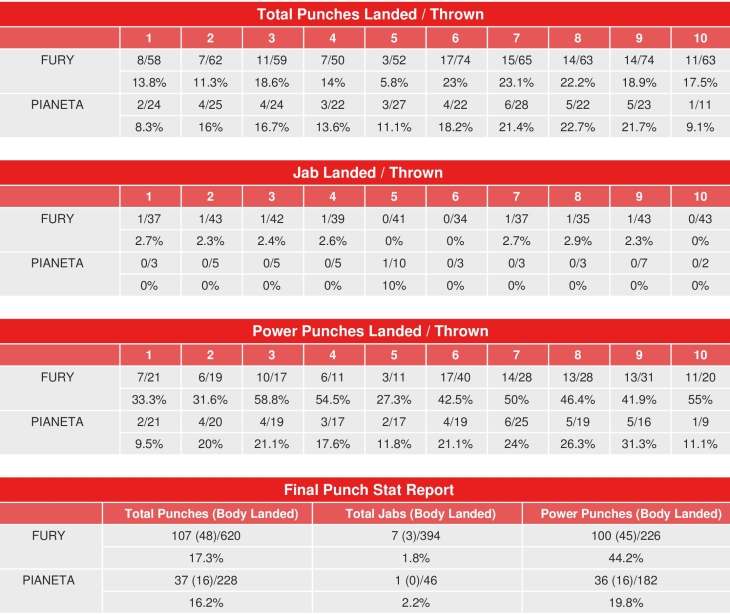 Tyson Fury set up a world title fight with WBC heavyweight champion Deontay Wilder with a points victory over Francesco Pianeta in Belfast on Saturday.

On just his second bout since ending a two-and-a-half year absence from the ring, former world champion Fury looked understandably rusty in just doing enough to see off journeyman Pianeta.

Fury will need to be far closer to the fighter that once dominated the heavyweight division when facing the undefeated Wilder.

That fight is expected to take place in Las Vegas later in the year with Fury's promoter Frank Warren confirming the venue and date will be announced next week.

Wilder was ringside in the Northern Irish capital and seemed to appreciate Fury's introduction to the ring accompanied by the tune of "Sweet Home Alabama", Wilder's home state.

There was much less to impress Wilder once the action got underway as Fury failed to land a knockout blow.

However, Fury controlled the fight throughout to stretch his own unbeaten professional record to 27-0.

What a masterful performance by Fury. I'll bet Wilder is really scared now!

It was really bad fight, Fury stink the place as always. Landed 7 jabs, what an amazing fighter... Bum.

If Fury had the body fat level of wilder, he'd be 15 stone as well. He needs to hit the weights. Also, Fury is lourded for his jab which he doesn't land!