Tyson Fury: Steve Cunningham, Not Wilder, Was My Toughest Opponent

Deontay Wilder famously dropped Tyson Fury twice when they fought in December 2018, the second time in a way that made it appear Fury wouldn’t get up.

Wilder still wasn’t Fury’s toughest opponent – not even close, according to Fury. The lineal heavyweight champion considers Steve Cunningham the most formidable foe he has faced in 30 professional fights.

Cunningham floored Fury in the second round of their April 2013 bout in New York. Fury got up from that knockdown and eventually knocked out Cunningham, a former cruiserweight champion, in the seventh round in The Theater at Madison Square Garden.

“I wouldn’t say [Wilder] was the toughest fight,” Fury said of their controversial split draw during a recent conference call to discuss his rematch with Wilder on Saturday night in Las Vegas. “I would say that was one of my easiest fights, to be fair. Other than the two knockdowns, it was a pretty one-sided fight. Yeah, my most difficult fights were much more harder than that. Deontay Wilder’s not my toughest opponent – that’s for sure. My toughest opponent in my whole career was Steve Cunningham. He was a former cruiserweight champion. I fought in him 2013 in New York, Madison Square Garden, and that was the toughest fight I ever had.” 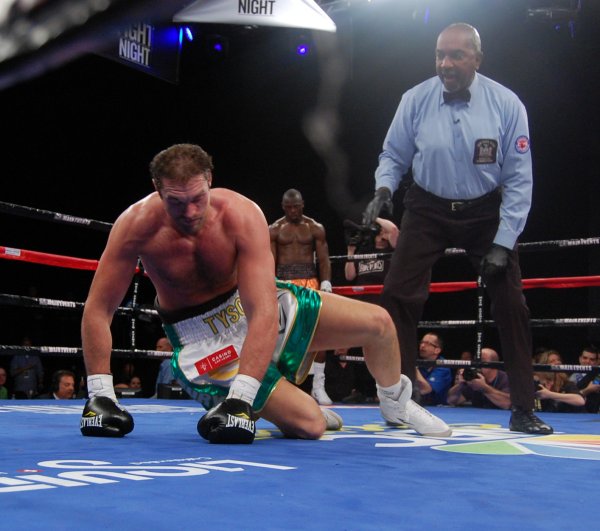 England’s Fury was behind by the same score, 57-55, on two cards when he finished Cunningham with a right hand in the seventh round. The third judge had their fight even entering the seventh round (56-56).

“At that time in me life, I had never fought anybody like Steve Cunningham,” Fury said. “He won the [IBF] cruiserweight title and defended it maybe seven times or something like that. He was a unified champion and it was my step up to anybody with that type of ability. And he was slick, and he was hard to hit. He was very awkward, and he was a very good boxer, so that was the toughest fight of me life.”

The 6-feet-9 Fury weighed in at 254 pounds prior to encountering Cunningham, who officially weighed 210 pounds. Fury didn’t underestimate Philadelphia’s Cunningham, even though he had a 44-pound weight advantage and stood six inches taller than the 6-feet-3 Cunningham.

“I never underestimate anybody,” Fury said. “He was 6-foot-3, 210 pounds. He was probably taller than Evander Holyfield, and bigger as well. So, we say small heavyweights, but they’re really big heavyweights. But today, the heavyweights have gone super-sized. So yeah, he was a tough opponent. I didn’t underestimate him. He was just a very good [opponent], very good boxer.”

Cunningham went 5-3-1 a heavyweight. He returned to the cruiserweight division for two of his three final fights, and finished his career with a record of 29-9-1, including 13 knockouts.

I hope Wilder uses his jab more and sets up the big shot because if he gives up rounds like he did against Ortiz it may backfire.

Steve Cunningham. A nobody in any era. And Fury critcizes Wilder's opponents?

Calzaghe vs Lacy 2.0 beating for 12...wilder is going to look lost swinging for the fences gassed and demoralized

If Wilder fights like he did against Ortiz in their rematch, Fury will win by easy UD. Wilder fought like he was uncertain and a little bit shy on the trigger until he connected.

[QUOTE=Bum squad;20397539]Same as Calzaghe who sighted a washed up Eubank as his toughest fight.[/QUOTE] Eubank shouldn't have lost that fight. The dude was 31 and still had power. Calslappy was just too fast for him and Eubank was never one…