According to Fury, when David Haye withdrew from the planned December rematch date with Bellew - it was Fury who got the call to step in on late notice.

The Haye rematch was eventually rescheduled to May 5th, and saw Bellew get a crushing knockout victory in five rounds at the O2 Arena in London. 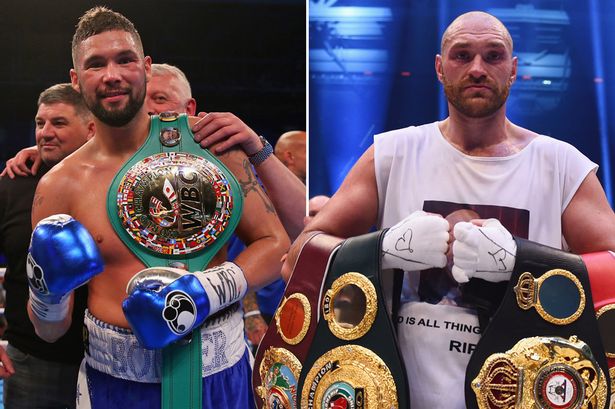 "When David Haye pulled out of the Bellew fight [in December] with injury for the second time, for the Bellew 2 fight, they called me and said will you step in? Bellew called me and he said ‘can I have a meeting with you?’ I said ‘yeah, no problem’. Me and Tony went and had a secret meeting in Aintree to talk about a possible fight on a specific date between me and him, because David Haye had pulled out. We agreed on a 50/50 deal for whatever date they were supposed to fight on," Fury told IFL TV.

“I was 27 stone [378-pounds] when I agreed the deal. I said ‘yeah, I’ll fight you in my comeback, no problem. I’ll take that date, that will do.’ They decided not to go down the Tyson Fury route, they went down the David Haye route."

Fury then indicates that Bellew's promoter, Eddie Hearn of Matchroom, offered him a three fight deal.

The deal would have seen Fury fight three separate opponents - with two of the three being Hearn fighters - and all three fights would lead to a blockbuster meeting with IBF, IBO, WBA, WBO heavyweight champion Anthony Joshua.

“Then he offered me a three-fight deal. One of them was to fight an American guy – Travis Kauffman. And then to fight Dillian Whyte and then fight Tony Bellew and then fight Joshua," Fury said.

“We couldn’t agree terms [to fight Joshua]. There were no terms agreed to fight Joshua. Eddie can’t talk for AJ, he’s got to do his own thing. The facts of the matter is, I’m the lineal heavyweight champion of the world. I don’t have to fight three bums to fight anybody.

“I don’t need to prove myself… I offered to fight him in my first fight back and they said no. They don’t want to fight me. They only tried to sign me to sideline me like they did with Dillian Whyte and Baby Miller and Luis Ortiz. Sidelined them.”

[QUOTE=The plunger man;19028193]I hope he doe's sign to fight wilder because every man desrves a big fight. I just hope he really is ready to fight and not just playing games because if he is he will get blown out…

[QUOTE=Raggamuffin;19027984]Would have? He said he would fight Bellew with NO tuneup lmao. Foh trying to twist **** lmao. And your hope is that Fury doesn’t sign to fight Wilder lmao. ****en pathetic lmao.[/QUOTE] I hope he doe's sign to fight…

[QUOTE=The plunger man;19027469]it has everything to do with it gumbo...he would have had the same tuneup fights then a bellew fight where he would earn mega buck...then if he won an even bigger purse against whyte and then a massive…

[QUOTE=Raggamuffin;19026592]What does Fury telling us what happened with Bellew THEN have to do with what Fury doing now??? Lmao He agreed to fight Bellews bum ass and told us what Bellew did. Fury fighting two fights now has nothing to…