Tyson Fury Reveals 9 Fighters He Wants To Face Beyond Joshua

A few  months back, Fury had mentioned the plan of retiring after two to three more fights, but now he wants to continue fighting for much longer than that.

He captured the WBC crown back in February with a seven round stoppage over Deontay Wilder at the MGM Grand in Las Vegas. 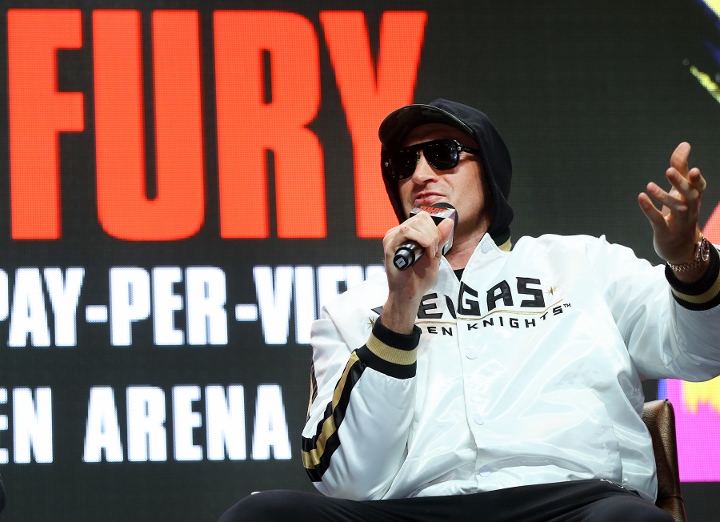 A trilogy fight is being planned for the fall, after Wilder exercised an immediate rematch clause, but due to the coronavirus pandemic there is no telling when or where that contest will happen.

The earliest the Joshua fight could take place is in 2021.

Beyond Joshua, Fury named off several boxers that he wants to face at the weight - including Dillian Whyte, Andy Ruiz, Daniel Dubois, Efe Ajagba, and Tony Yoka.

"I've been thinking about it and initially I had three fights left on my contract, I’ve got two fights left on it now, I’ve got Wilder and Joshua, but I’m just going to keep going because there’s nothing else to do is there really?" Fury said during a live Instagram video.

"For me, I’m 31 years old, fit as a fiddle, in great mental spirits, I train three or four times a day for bants, and it’s like, ‘what else am I going to do with my life?' You know, there’s plenty of other fighters out there for me to beat up on. You’ve got Dillian Whyte, Jarrell Miller, [Kubrat] Pulev, [Andy] Ruiz, [Luis] Ortiz, [Daniel] Dubois, [Joe] Joyce, there’s loads. There’s Efe Ajagba, the big Nigerian Olympian, there’s Tony Yoka the French Olympic gold medallist."

[QUOTE=Douglas Cohen;20564426]If he beats Wilder in the rematch, beats Joshua to become undisputed, and then beats all those guys he mentioned, his accomplishments will surpass either Klitchko brother, and he'll be the best heavyweight since the golden era of the…

[QUOTE=Mindgames;20567462]Yeah, i think he needs a confidence builder for a start before a Fury fight. He's weight is interesting, in the 230s he looked awful, and going back in hes career he looked awful heavier. I'm surprised he didn't use…

[QUOTE=Ray*;20567229]Agreed, I actually meant come for him as in activating his rematch clause. It’s not like Wilder would throw combos, he would do the same chit, throwing one punch at a time. This was why Freddie Roach was pissed at…

talk is cheap, just cant see it happening, fury is up and down, hes just up at the mo, when he goes down he will go away

[QUOTE=Mindgames;20567123]Wilder won't come for him though, because Wilder can't sustain any workrate. He sits back and hopes for the big one, any kind of pace he's gonna burn out early.[/QUOTE] Agreed, I actually meant come for him as in activating…