Tyson Fury on Joshua: I’ll Knock Him Out in Two To Three Rounds

WBC heavyweight champion Tyson Fury not only believes that he will knock Anthony Joshua out - he expects the end to come in the first few rounds.

Fury has been gunning for a future fight with Joshua, who has the IBF, IBO, WBA, WBO world titles.

A contest between the two world champions is being targeted for 2021. 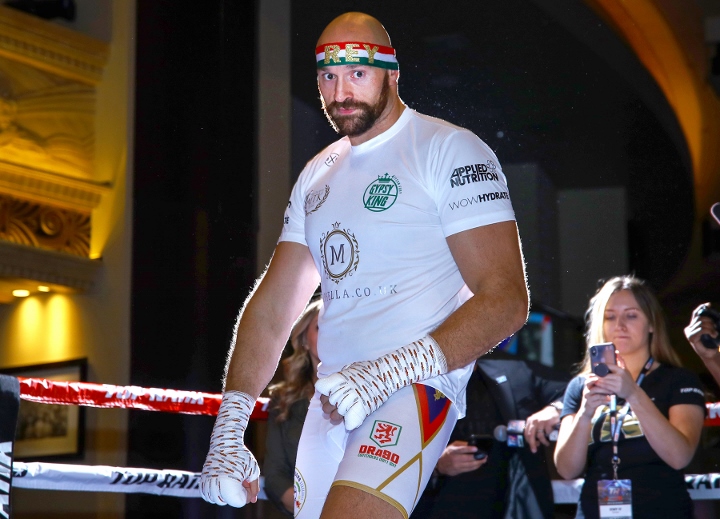 Back in February, Fury stopped Wilder in the seventh round to capture the WBC title.

And Joshua is scheduled to make a mandatory defense against Kubrat Pulev by the end of the year.

Should both champions win, they will be in position to collide.

"AJ’s style is tailor-made for mine. Upright, walking forward, classic defence," Fury said during an appearance on Redknapp’s Home Fixture on Sky Sports.

"Strong and powerful, but no footwork, hardly any resilience and a bit gutless when it comes down to getting clipped. I’ll knock him out around two to three rounds. First time I connect, his legs will do a dance. I’ll just jump on him like that fat kid [Andy Ruiz]. I’ll tell you what shot it’s gonna be, should I? ‘Left hook to the temple, you’re gonna see him do a Bambi dance all over the ring.

"Eddie Hearn talks a lot of hot air as usual. I’ve been offering to fight Joshua for quite a while. I’ve been trying to make that fight happen for the last five years. And it’s not happened at all. Eddie’s obviously Joshua’s promoter, so he’ll have to be speaking to my team to make the fight happen, give the fans what they want and stop running away from the biggest fight since Lennox [Lewis] fought Frank Bruno.

"Have the guts to step up to the plate and get flattened, son."

[QUOTE=deathofaclown;20586337]They said exactly the same Before the second Wilder fight Wilder is a much bigger puncher than Joshua, so why would you run from Joshua and not Wilder[/QUOTE] Because AJ's KO punches are hooks and uppercuts that catch you when…

What’s interesting about Fury vs Joshua is who hits harder, Joshua or Wilder. Fury took Wilder’s best shot and got off the canvas, not once but twice, to arguably win the first fight. And went into the 2nd fight with…

[QUOTE=denium;20586426]Fury is also naturally the bigger man. Joshua at his real weight (Ruiz II) didn't weigh much more than Wilder did against Fury the second time. AJ comes in bulked up he gasses and gets stopped, he comes in light…

A slimmer AJ working on cardio would give fury more trouble. Although, his chin is still questionable. Did he have a concussion before the 1st ruiz fight which is skewing our perceptions??? Won't know till he takes a head shot.…