Tyson Fury said he would "smash" Dana White after the UFC president advised the former unified heavyweight champion not to consider moving into mixed martial arts.

Fury – who is expected to return to the ring in February to face Deontay Wilder in a rematch – has been taking on different sports over recent months.

Having appeared in WWE to wrestle Braun Strowman, Fury has also trained alongside UFC middleweight Darren Till. 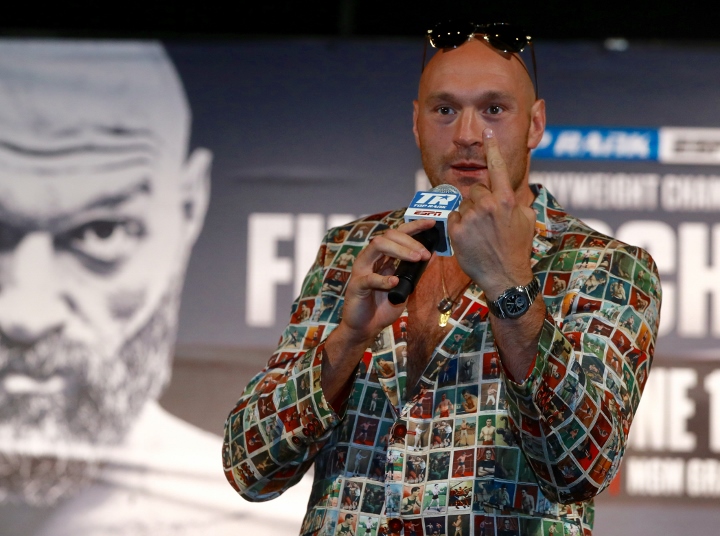 The 31-year-old claimed to have spoken with Conor McGregor about training together, though White stated his belief Fury should stick to boxing.

"If Tyson Fury wants to fight in MMA, I've got a tonne of guys that would love to fight him," White told TMZ Sports.

"I just don’t know why. I can't wrap my head around why. Tyson Fury is a very marketable heavyweight, I believe he's one of the best in the world, he's an incredible fighter, and promoted the right way could be part of the three of four biggest fights in heavyweight history.

"So why come over here and get smashed when you can stay there? Tyson Fury your time is now. You’re the man in boxing. You’re one of the top four guys in the world in boxing. Why even think about coming over here?"

However, Fury, who acknowledged he only heard about White's comments through his father, dismissed White's claims.

"I didn’t see them, but my dad saw them and my dad's calling him out for it," Fury told iFL TV at his book signing in London on Wednesday.

"I'd smash him for free, so I'm not bothered. Listen, everyone's got their opinion.

"I've got no interest really, I don't care. I'd probably get smashed in a lot of things, but do I care? No."

Fury also suggested he and fellow British heavyweight boxer Dillian Whyte should take on two of UFC's best in a tag-team contest, after Stipe Miocic claimed he would relish a fight.

"I'll fight Stipe and Dillian Whyte can fight Francis Ngannou," Fury said. "I'm sure he’s up for that. Tag team, Britain versus MMA."

[QUOTE=Gideon lock;20188592]I know what you mean, pac wearing 4 oz mitts would fuk up most ufc fighters careers[/QUOTE] Lmao it would be a sight to see tho.... Imagine how fast and deadly he would be. Sheesh

[QUOTE=KillaMane26;20188582]Yeah i remember after Floyd/Conor Manny said he wanted a go... Im like LMAO Dana aint gonna let u destroy one of his guys keep dreaming[/QUOTE] I know what you mean, pac wearing 4 oz mitts would fuk up most…

[QUOTE=Gideon lock;20188572]No worries man, i was referring to fury as the thread is about him. I agree on canelo/masvidal it would be a [B]brutal affair[/B] in canelos favour.[/QUOTE] Yeah i remember after Floyd/Conor Manny said he wanted a go... Im…

[QUOTE=KillaMane26;20188529]Wasn't talking about Fury specifically when i said that but the Canelo/Jorge matchup guys were talking about. But yeah u right about Fury[/QUOTE] No worries man, i was referring to fury as the thread is about him. I agree on…