Tyson Fury: No Problems With What Bayless Did; He Did A Fair Job

LAS VEGAS – Tyson Fury has no issues with how Kenny Bayless officiated his rematch against Deontay Wilder.

The veteran referee from Nevada broke Fury and Wilder apart numerous times during their physical fight Saturday night at MGM Grand Garden Arena. Without having warned the newly crowned WBC heavyweight champion, Bayless also deducted a point from Fury for hitting Wilder when he called for a break late in the fifth round.

“Listen, the man’s got a job to do,” Fury said during the post-fight press conference. “He done a good job. He took control of the fight and he did what he had to do. I’ve got no problems with what he did, and it was what it was. You know, it was a grueling fight while it lasted, and he was trying to clean it up in there. He hit me after the bell – not after the bell, after he said, ‘Break,’ we hit each other. I got a point taken off, but it wasn’t gonna alter the fight. I think he did a fair job, to be fair.” 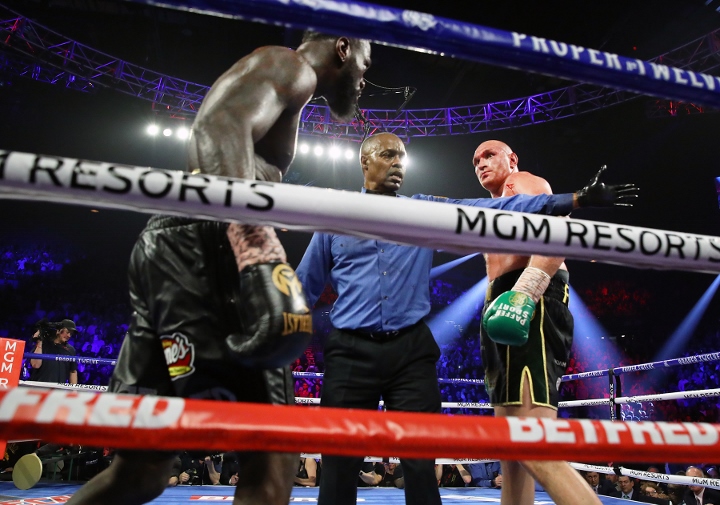 The point deduction was rendered irrelevant, of course, because Fury stopped Wilder in their 12-round rematch. Bayless also ruled that Wilder slipped or was pushed to the canvas twice, but he counted a knockdown for Fury in the third round after he hit Wilder on the back of his head.

Wilder got up from both knockdowns, but Fury battered the exhausted ex-champion during the seventh round. Mark Breland, Wilder’s assistant trainer, threw in the towel because he felt Wilder, backed into a neutral corner and absorbing unanswered right hands from Fury, was taking too much punishment.

Once he saw the white towel hit the canvas, Bayless stopped their fight at 1:39 of the seventh round.

This is a huge lost to Keith and LDBC.:afro:

[QUOTE=Toffee;20419034]He warned them both for throwing after the break a couple of times. Personally, I thought Wilder did it more than Fury but it's all moot. When he took the point off Fury I didn't think for a second that…

[QUOTE=LetOutTheCage;20418804]Bayless was awful, would stop Fury ever time he tried to fight on the inside and the points deduction was ridiculous, he was clearly favoring one of the fighters[/QUOTE] Yes and to think Wilder is the one complaining about Bayless!

[QUOTE=Oshio;20418695]Bayless should have at least warned Fury before the deduction and should have stopped the fight earlier[/QUOTE] He warned them both for throwing after the break a couple of times. Personally, I thought Wilder did it more than Fury but…

I disagree with him here, that point shouldn't have been taken off