Tyson Fury: No Joshua Fight If He Loses To Andy Ruiz

Perhaps obvious to most of us Tyson Fury has pointed out that there is no chance of himself and Anthony Joshua ever fighting should the latter lose his December 7th world heavyweight title rematch against Andy Ruiz Jr.

Fury, who on Thursday will taken on “The Monster Among Men” Braun Strowman at the WWE pay-per-view event ‘Crown Jewel’ in Saudi Arabia, says there is no chance of the two heavyweight rivals ever facing one another should Joshua once again lose to Ruiz Jr. 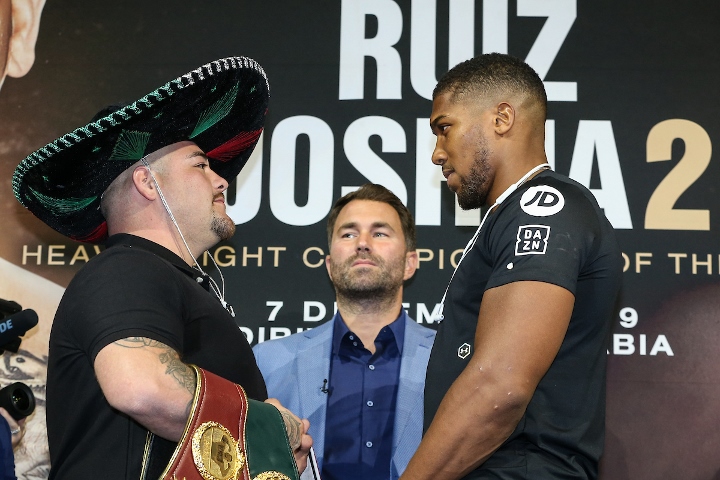 Fury, who is in line to face WBC champion Deontay Wilder early next year in a rematch of their own, stated to Sky Sports News that if Joshua were to beat Ruiz and reclaim his WBA, IBF, IBO and WBO heavyweight titles then the all-British tussle would have to take place in America.

“All my fights have to be in America now,” Fury said.

“So unless they’re [Joshua’s team] to travel to the U.S, which after his last visit, I don’t think he’ll be too happy on going, then it’s not happening any time soon, that’s for sure.”

Fury, who outside of boxing appears to be having the time of his life right now dabbling in wrestling and is rumoured to be recording a Christmas song with pop star Robbie Williams, has even declared his interest at moving into Mixed Martial Arts at some point in the future.

As for the Ruiz-Joshua rematch, another huge sporting event that will be taking place in Saudi Arabia this year, Fury has dismissed both fighters and has no interest in predicting the outcome of the fight.

“I think they’re both bums and they are both not on my league. My mother always said, if you can’t say nothing nice, don’t say it at all, so I’m just going to keep my mouth shut on this one.”

[QUOTE=5000boxing;20166699]I agree on most except what you said about ruiz and haymon.. Al already had Andy's respect and loyalty ever since Al helped him get away from bob.. Eddie and Al made a deal to set up the AJ fight…

[QUOTE=Inspired;20157184]Thing with Kell Brook is he was pushed heavily by sky sports partially through the matchroom/hearn connection and partially because Johnny Nelson trains in the Ingle gym too. He had the likes of Spencer Fearon and Carl Froch pushing him…

[QUOTE=5000boxing;20154969]Hmmm.. Good points. Kell didn't want no smoke with Spence initially.. Stating that he couldn't wake up to go train for a nobody like Spence who nobody knows in America... I wondered why he never fought Thurman..[/QUOTE] Thing with Kell…

This bum has no belt and he’s out there in Saudi Arabia begging body building actors for money, yet he thinks he calls the shot, lol. He knows AJ will knock him out clean and he’ll forever duck him. The…