LAS VEGAS – Tyson Fury did everything he promised he’d do Saturday night.

The undefeated Fury, heavier and more aggressive this time, beat up Deontay Wilder, knocked him down twice and eventually caused Wilder’s assistant trainer to throw in the towel during the seventh round of their WBC heavyweight championship rematch at MGM Grand Garden Arena. England’s Fury (30-0-1, 21 KOs) knocked down Wilder (42-1-1, 41 KOs) once apiece in the third and fifth rounds and was battering the former champion when Wilder’s assistant trainer, Mark Breland, decided he had seen enough.

Wilder didn’t want to stop fighting, but referee Kenny Bayless called an end to the bout at 1:39 of the seventh round because Breland threw the towel into the ring. Wilder asked head trainer Jay Deas and Breland why Breland threw in the towel after he walked to his corner.

“I’m doing good,” Wilder told ESPN’s Bernardo Osuna after suffering his first defeat. “Things like this happen. The best man won tonight, but my corner threw in the towel and I was ready to go out on my shield. I had of things going on heading into this fight. It is what it is, but I make no excuses tonight. I just wish my corner would have let me go out on my shield. I’m a warrior. He had a great performance and we will be back stronger.”

Fury’s technical-knockout victory Saturday night was a much more conclusive result than the controversial split draw for which they settled in their first fight 14 months ago in Los Angeles. The judges determined that outcome, but Fury made sure the scorecards of Glenn Feldman, Dave Moretti and Steve Weisfeld weren’t necessary this time.

Wilder floored Fury twice in their first fight, but Fury was the harder puncher and the more physical fighter in a rematch that drew a capacity crowd of 15,816.

The 6-feet-9, 273-pound Fury came in 16½ pounds heavier for their rematch than he weighed for their first fight. He repeatedly promised that the additional weight would help him aggressively go after the hard-hitting Wilder and wear down his significantly lighter opponent by leaning on him. 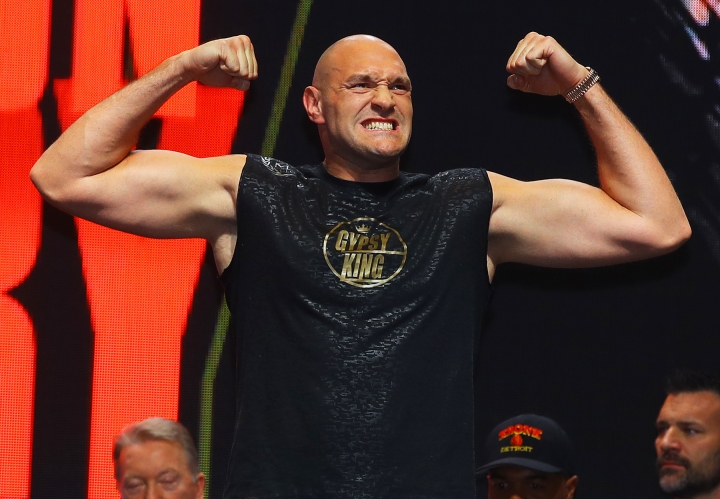 The 6-feet-7, 231-pound Wilder, who was 18 pounds heavier for their rematch than for their first encounter, appeared completely exhausted by the fourth round, one round after suffering the first of two knockdowns in the fight. Wilder also bled from his left ear early in the fight.

“A big shout out to Deontay Wilder,” Fury said. “He came here tonight and he manned up. And he really did show the heart of a champion. I hit him with a clean right that dropped him, and he got back up. He is a warrior. He will be back. He will be a champion again. But I will say, the king has returned to the top of the throne!”

Fury, 31, won the WBC title from Wilder that the Tuscaloosa, Alabama, native had owned for five years. Fury is contractually obligated to give Wilder a third fight that is supposed to take place by August, assuming Wilder exercises that right.

The 34-year-old Wilder was the longest-reigning champion in boxing before Saturday night. The 2008 Olympic bronze medalist had made 10 successful defenses of a title he won when beat Bermane Stiverne by unanimous decision in January 2015 at MGM Grand Garden Arena.

Prior to defeating Wilder, Fury, who had held the IBF, IBO, WBA and WBO titles, contended he still was boxing’s lineal heavyweight champion because he hadn’t been beaten in the ring after upsetting Wladimir Klitschko to capture those titles in November 2015. Fury spent more than two years away from boxing after defeating Klitschko while he battled alcoholism, cocaine addiction and depression.

CompuBox’s unofficial statistics showed just how one-sided the fight had become before it was stopped.

Fury knocked down Wilder for the second time in the fight with 1:50 to go in the fifth round. A left to the body sent a retreating Wilder to the canvas two rounds after he went down for the first time in this fight.

Bayless deducted a point from Fury with about 20 seconds to go in the fifth for hitting Wilder when Bayless called for a break.

Wilder already appeared fatigued during a sloppy fourth round in which he went to the canvas early in it after losing his footing. Bayless ruled that Wilder fell down, that he wasn’t sent down by one of Fury’s punches.

A right hand by Fury made Wilder hold him about 30 seconds into the third round. They had to be broken apart by Bayless multiple times before Fury landed a right hand that knocked down Wilder for the first time in more than nine years.

Fury hit Wilder with a left hand and then a right to the back of his head that sent Wilder to the canvas. Wilder lost his footing as he went down, but he was hit by those two punches prior to that point.

Wilder went down with about 35 seconds to go in the third. He got up, held Fury as tight as he could and went down again.

Bayless rightly ruled that a slip, though. By the time they came together again, the round ended.

Fury’s jab caught Wilder again early in the second round. Wilder landed a hard jab of his own in the final minute of the second.

They tied each other up three times later in the second round as well.

Wilder drilled Fury with a right hand just 53 seconds into their fight. Fury opened his eyes wide after absorbing that shot.

Wilder hit him with another right hand several seconds later, but it didn’t land as flush as the first shot. Fury then hit Wilder with a right hand of his own that backed up Wilder.

A stiff jab by Fury backed up Wilder later in an intriguing opening round.

Their fight Saturday night unfolded far different from the initial battle in December 2018 at Staples Center.

The hard-hitting Wilder floored Fury twice, once in the ninth round and again in the 12th, but Fury finished that fight on his feet.

Only one judge, Canada’s Robert Tapper, scored that fight for Fury, 114-112. Tapper credited Fury for winning eight of the 12 rounds.

Referee Jack Reiss was widely commended for affording Fury an opportunity to get up after Wilder’s vicious right-left combination sent Fury flat on his back with 2:21 to go in the final round. Though it appeared Fury wouldn’t get up from those punches, the resilient lineal champion lifted himself off the canvas after Reiss’ count reached six and made it to his feet before Reiss counted to 10.

Fury finished strong, as he came back to land hard punches on Wilder during the remainder of the 12th round. Wilder criticized Reiss for what he considered a long count the second time he dropped Fury.