Tyson Fury believes Deontay Wilder is “very nervous” ahead of their WBC heavyweight showdown as the pair almost came to blows on Wednesday.

Fury and Wilder faced off at a news conference just days out from their rematch at the MGM Grand, and they shoved each other before being separated.

The Brit, who drew with Wilder in their previous bout in December 2018, believes the American is showing signs of nerves.

“Wilder is very nervous. I can see his jumper going in and out from the big heart beat pounding out of his chest,” Fury said.

“He’s terrified. He’s nervous as hell. He doesn’t know what to expect, and he’s getting knocked out.” 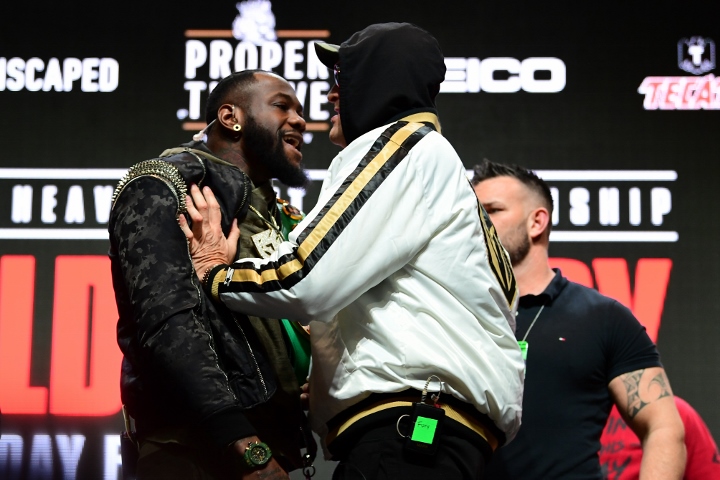 Fury later said that he didn't have an issue with the selected officials, including the judges and the appointed referee Kenny Bayless. He doesn't care about the fighting reaching a decision, because he plans to go for the knockout victory before the distance.

"Kenny Bayless is a top referee; he has refereed me before and he did a good job. I have no objections with the referees and judges, whoever they are they are, they will do a good job," Fury said.

"It's been no secret that I'm looking for a knockout. That's why I hired Sugarhill and went back to Kronk. He gets you to sit down on that big right hand, and that's the game plan."

"What I did last time clearly was not good enough, and what better club to go to than Kronk? I know they can bring out of me exactly what I need for this fight."

Wilder is nervous as he knows he can only win by ko. Alternative is fury boxing h is ears off

Fury needs to stay concentrated and continue what he did in the first fight for me. Keep it close too to take away distance from Wilder to power up them shots.

[quote=thereeldeel;20401402]tyson had a tough training camp as he should, wilder took the soft option being surrounded by his family and his aunt cooking comfort food for him, that's not a good way to prepare for the biggest fight of your…