Tyson Fury's Coach Explains How it Came Down To Picking Wallin

Back in June, undefeated heavyweight Tyson Fury made his Las Vegas debut with a second round demolition of Tom Schwarz at the MGM Grand in Las Vegas. The victory marked his official start as a Top Rank promoted fighter on ESPN.

Fury will make his return on September 14, when he faces huge underdog Otto Wallin, who is undefeated but very much untested against top level competition.

Should Fury come away with the win, he will move to a 2020 rematch with WBC world champion Deontay Wilder. 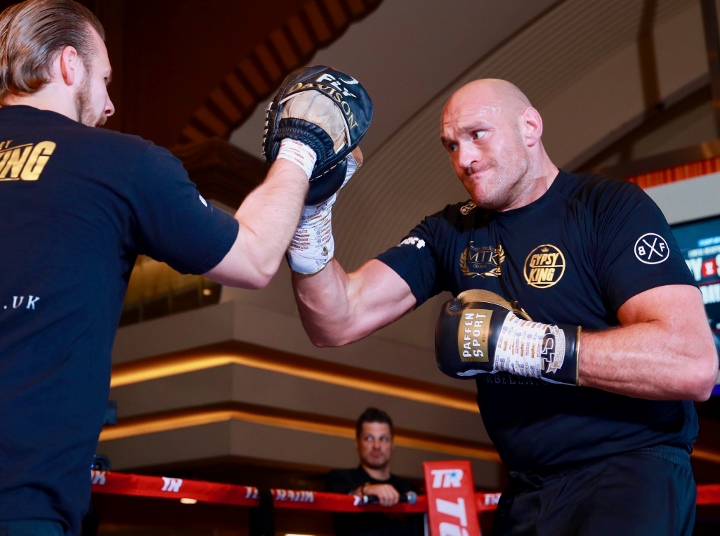 Not many fans are happy with Fury's selection of another undefeated up and coming fighter who might be in over his head.

According to Davison, there were several other names they would have liked - but they were all unavailable for one reason or another.

“You’ve got Al Haymon [at] PBC, you’ve got Top Rank, DAZN with Joshua and that. They all want to keep their heavyweights for who they’ve got. I know that [Kubrat] Pulev is in a situation for the IBF mandatory, he’s not going to take that fight [against Tyson Fury], didn’t want to take that fight," Davison told The Express.

“An offer got put out to Alexander Povetkin - he took the Hughie [Fury] fight. It’s difficult, y’know. Tyson said that he wanted [Jarrell] Big Baby Miller - he wasn’t going to get his licence in time (after a drugs offence). He then said Trevor Bryan, who signed to fight Manuel Charr. It’s very difficult.

“Adam Kownacki, he’s with PBC. Obviously [Anthony] Joshua and [Andy] Ruiz [Jr] are having their rematch. It was difficult. Luis Ortiz and Deontay Wilder [are having a rematch]. It’s no secret that Tyson and Deontay are looking to fight in the early part of next year. So it wasn’t the be all and end all because the big fights are around the corner.”

[QUOTE=PunchyPotorff;19985428]Quote: Originally Posted by PunchyPotorff Or 37 bums in a row for Wilder. No way to spin it. Fighters go with easier fights all the time in waiting for high profile title shots/rematches. Meanwhile, Wilder said early on that his…

Quote: Originally Posted by PunchyPotorff Or 37 bums in a row for Wilder. No way to spin it. [QUOTE=Curtis Harper;19983374]If we are going to consider a persons entire career, Fury has more than 2 bums in a row. It's just…

[QUOTE=PunchyPotorff;19983116]Or 37 bums in a row for Wilder. No way to spin it.[/QUOTE] If we are going to consider a persons entire career, Fury has more than 2 bums in a row. It's just telling how he's choosing his ''opponents''…

[QUOTE=Brettcappe;19983253]Hey fool! Do some research and talk to people in the business if you know any. The Joshua MSG fight was supposed to be a cakewalk to enhance A.J's profile in the states. The offers to Wilder were contingent on…