On the week of the biggest fight of his life, Teofimo Lopez fielded a whole lot of questions, ranging from typical tactical queries to deep dives into his relationship with his father and extended family. The easiest question, which came in his final virtual media availability, was “what are you reading these days?” He replied that he had recently read The Secret.

No answer could have been more illuminating in terms of understanding Lopez as a person, and by extension, a fighter. The Secret, a 2006 self-help book by Rhonda Byrne, is essentially a magical thinking guide that suggests that if you think and talk about something fervently enough, it will ultimately materialize in your life.

Over the last two years, Lopez seemingly followed this theory obsessively, honing in on his goal of beating Vasiliy Lomachenko. He and his father Teofimo Sr. brought him up in every interview, hounded him at press conferences, spray painted over his posters, and in general never let Lomachenko or the public forget that one day, they would have no choice but to pay attention to him.

Still, when it came time for them to fight, actually picking Lopez to win kind of felt like believing in The Secret itself—a belief that wasn’t based on any proof whatsoever. Sure, Lopez had the edge in the physical measurables, and he talked a good game, but as the great Ralph Wiley once wrote “microphones don’t hit back.”

On Saturday night, the proof came.

Lopez scored a unanimous decision victory over Lomachenko, the man many considered to be the finest prizefighter on the planet, to become the true lightweight champion of the world. A result that required some magical thinking to fathom—one of this generation’s best technical operators losing on the scorecards, fair and square, and without the aid of any knockdowns.

“He was pretty basic, honestly,” said Lopez. “I fought who people said was the pound for pound (champion) and I won every round, or, most of the rounds." 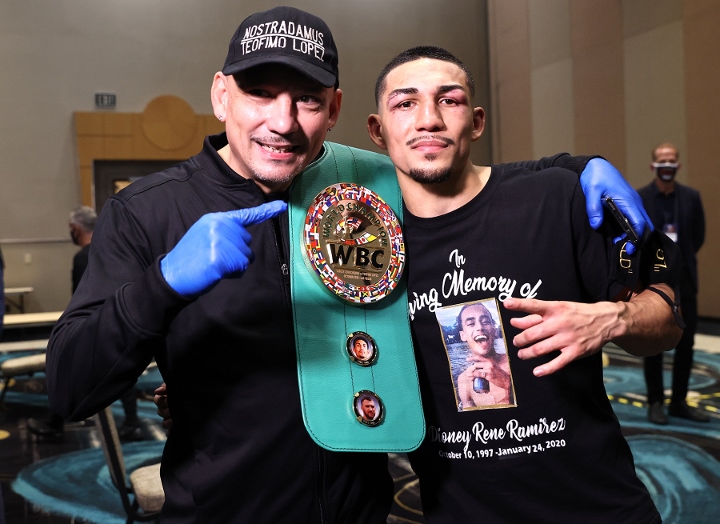 Lopez carried his mantra of persistence into the ring, almost doubling his opponent’s output. According to Compubox, Lopez outthrew Lomachenko 659 to 364, landing 148 of those shots, more than any opponent of the Ukrainian legend ever has before.

Lomachenko, meanwhile, landed about as much as the proverbial microphone Wiley described in the first eight rounds. In the moment, television commentators and internet posters surmised that he was simply “downloading information” for a late attack. But after nearly half a fight of downloading, it became evident that if Lomachenko’s modem wasn’t acting up, then perhaps this file was a little too big for his hard drive, because no fighter of his intelligence would enter a fight with a plan to willingly cough up more than half of the available rounds.

If you ask Lopez Sr. what happened however, he’ll tell you it’s exactly what he envisioned. The elder Lopez fancies himself a mystic of sorts, and even wore a NOSTRADAMUS hat on fight night and in his son’s corner. One might think this is a character he’s portraying for promotional purposes if it weren’t how he behaves one hundred per cent of the time, no matter the occasion. In fact, Lopez Sr. literally wore a Teofimo Lopez baseball cap to his son’s wedding.

Not only did the fight unfold the way Lopez Sr. claims he saw it going, but it happened because of a secretive method of his own that he and his son follow.

“We've got this thing that we call the pyramid. It's like an angle, you can touch the fighter but he can't touch you,” said Lopez Sr. “It was because of the pyramid. We can hit you but you can't hit us. He couldn't understand that style.”

After the eighth round, Lomachenko did start to pick up the pace, perhaps sensing desperation whether it was being conveyed in his own corner or not. Depending on which judge you ask, he began either winning some of these rounds (Tim Cheatham 116-112, Steve Weisfeld 117-111), or simply making them more entertaining (Julie Lederman 119-110).

This is where Lopez and his father’s vision for the future seemingly differed.

“My father was like "what are you doing" and I was like, I'm staying composed, because he's trying to take me to the later rounds,” said Lopez. “My father told me in the last round that I should box him, and I knew that wasn't a smart idea.”

Many have analogized Lomachenko as a grand chess master, one who thinks four steps ahead of his opponents. In this fight, Lomachenko encountered what is known in chess as zugzwang, which essentially means any move you can make is a bad move. All told, not only was he hit more often by Lopez than ever before, but he was also hit harder than ever before, perhaps save for a knockdown at the hands of Jorge Linares in 2018.

According to Lopez, his opponent and perhaps even his own promoter couldn’t conceive of this scenario unfolding.

“They didn't give me a rematch clause for a reason. They gave me a contract on the side saying here's what you will get for your next fights, pretty much saying you're going to lose,” he said.

All the self-belief in the world couldn’t help a fighter who wasn’t spectacularly talented beat a fighter the caliber of Lomachenko. The Secret is fine advice insofar as it suggests that thinking positively and focusing on a thing leads to better results, two things that are harmlessly inarguable taken at face value. Taken to any degree further however, and the suggestion that mere visualization will induce spectacular results is akin to a belief in a Santa Claus who only brings presents for the “nice” children. The poor children don’t receive Christmas gifts because they’re all “naughty”—there’s a very obvious element at play, even within this fantastical world.

Even when the results justified the means, there was just a hint of relief in the voice of Lopez Sr., knowing that everything he had thought with the utmost confidence could now seem like something he knew all along.

“I'm just so glad that everything I said came into existence,” said Lopez Sr.