Trainer: Rob Brant Can Beat Gennady Golovkin, Stop Him Too

Brant (24-1, 16 KOs) is a transplant from his native St. Paul’s, Minnesota, to Las Vegas, where he spent eight weeks preparing for Murata (14-2, 11 KOs) and his initial fight under Muhammad, a former 175-pound champion.

Brant faced Murata while seven days shy of a year removed from his lone defeat on October 27, 2017, a one-sided unanimous decision loss to left-handed former 160-pound champion Juergen Braehmer of Germany in a 167-pound bout in Schwerin, Germany. 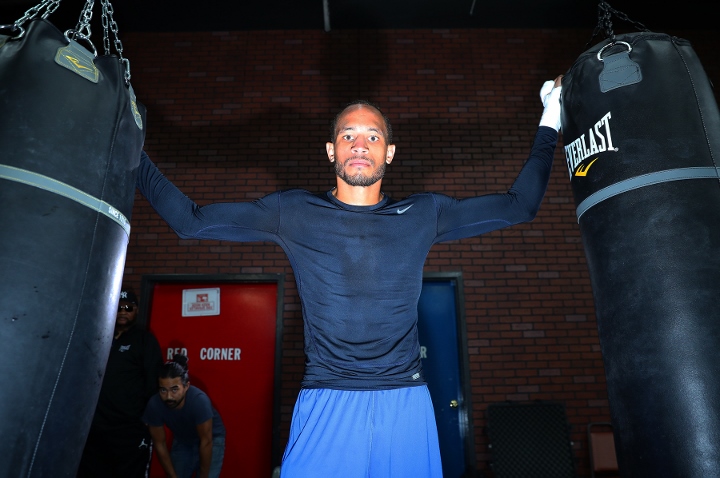 “Eddie was very specific in the way that he trained me, looking at tape and making everything in training about gearing up for Murata,” said Brant, 28, to BoxingScene.com.

“There were guys who would come forward, guys who would be slick boxers, and it was all geared toward keeping my endurance up, keeping me sharp mentally and covering all ground.”

“Bravo” weighed 157 ¾ for his last bout in March, a first-round knockout of Colby Courter.

“I’m really bad against boxers who are quick on their feet,” said Murata, a 32-year-old 2012 London Olympic gold medalist to reporters in Las Vegas. “I took a lot of blows. It’s the first time I’ve taken such a beating.”

It is for those reasons that Mustafa likes Brant’s chances against Golovkin (38-1-1, 34 KOs), whose unanimous decision in March 2017 over switch-hitting Daniel Jacobs in a title unification ended “Triple-G’s”  23-fight, nine-year stoppage streak.

Over his next three three bouts, Golovkin sandwiched a draw and a split-decision loss to Canelo Alvarez in September 2017 and 2018 around a second-round stoppage of Vanes Martirosyan in May.

“Rob is a boxer-puncher, and I would like to see Rob fight Triple-G,”said Muhammad, 66, who twice defended the crown he won by dethroning Marvin Johnson via 11th-round TKO in March 1980.

"Rob is an athlete, first and foremost, but like I said, he can box and he can punch. Other than Jacobs, I don’t think Golovkin’s seen or been in the ring with two many of those."

On Saturday, the 31-year-old Jacobs (35-2, 29 KOs) earned his third straight victory over Sergiy Derevyanchenko for the IBF’s vacant crown, ending the loser’s stoppage run at six.

“I believe that my man, Rob, can beat all of those guys. But after his past few hard fights, I believe that Triple-G has shown that he’s lost a step or two,” said Muhammad.

“So if Rob lands a good one on Golovkin’s chin, he can go, too. I believe that with Golovkin, the door is starting to slam on him.”

Serious question. GGG was supposed to fght Murata in February if he wins against Brant. But Murata lost. Why didn’t GGG fight Brant yet he was willing to face Murata if Murata won vs Brant ?

[QUOTE=Robbie Barrett;19243612]They were vacant belts and Lemieux that won a vacant belt. :rofl:[/QUOTE] So again, who should he have beat for these belts?

[QUOTE=champion4ever;19243675]:eek: Whoa! This is perhaps the longest post in NSB history. I like GGG too. However, in your defense of Gennady Golovkin, your post reads more like a magazine article or a book.[/QUOTE] Thanks, I wouldn't call it a 'defense.'…

Zero chance. GGG wasn't ever even hurt by Lemieux, Jacobs, and Canelo all of whom are harder punchers than Rob Brant.