Teofimo Lopez is going with the tried-and-true, as opposed to the new-and-bold, approach for his upcoming lightweight unification title against Vasiliy Lomachenko on Oct. 17. That means replicating some of the things that worked well for him in the lead-up to his title-winning performance against Richard Commey last December, including conducting his training camp from the same secluded suburb in New Jersey and bringing on, once more, noted trainer Joey Gamache as an assistant.

Gamache, a former two-division titleholder and the head trainer for Swedish heavyweight contender Otto Wallin, says Lopez (15-0, 12 KOs) and Co. liked what he brought to their last camp. After all, if it ain’t broke, why fix it?

“They reached out to me before Otto’s fight (on August 15),” Gamache told BoxingScene.com. “We all worked together well as part of a team (for the Commey fight). They got a hold of me and, yeah, guess it works good.” 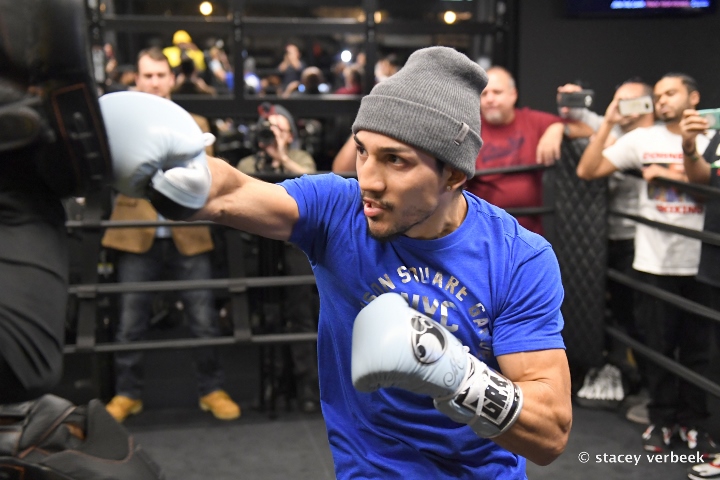 “There was some talk about going to Big Bear (California),” added Gamache, “but in the end, they wanted to stick to where they had the last camp with Commey. We’ve been here four weeks now, working hard and working smart.”

That would be the small town of Flemington, which is halfway between Manhattan and Philadelphia, making it an ideal location for attracting top sparring partners from both metropolitan areas.

“We get a lot of good sparring since his manager is Dave McWaters. He has a lot of good fighters,” noted Gamache, who spent the entire eight-week camp out in New Jersey for the Commey fight; he will do the same this time around, while staying in a hotel.

The Lomachenko-Lopez title fight, which was officially announced Tuesday, was originally expected to land at Madison Square Garden in New York, but because of the COVID-19 pandemic, will now take place in a crowdless environment in Las Vegas, inside the Top Rank “bubble” at the MGM Grand.

In addition to his wealth of boxing knowledge, Gamache has the distinction of having spent some time in enemy territory; Gamache worked with Lomachenko (14-1, 10 KOs) in a couple of his early fights.

“When I first worked with Lomachenko, the first fight I came in a day or two before the fight,” Gamache said. “For the (Orlando) Salido fight, I came in eight, nine days before the fight. But I got to know him. Very nice guy, very professional. But I spent a lot more time with Lopez for sure.”

Gamache declined to say if he had picked up any “trade secrets” from his time with Lomachenko, but he also made it clear that the key to Lopez’s success on Oct. 17 lies within himself – and his strapping 135-pound frame.

“I don’t want to give too much away, but Teofimo has to be himself,” Gamache said. “He is the fighter of today. Every fighter has his time. Loma had his time. He’s not a big guy. He’s more of a featherweight.

“He (Lomachenko) beat (Jose) Pedraza, (Jorge) Linares, (Luke) Campbell, but he got touched up in those fights and Linares dropped him. Lightweight is too big of a division for (Lomachenko). A top guy like Teofimo is going to show him all the difference. He’s a real lightweight and dangerous all the way around. He can box, he can punch. We’re excited about this opportunity, you know, taking over.”

I’m a huge Gatti fan but that fight vs Gamache made me sick to my stomach. That’s when I was young and naive. That’s the name of the game, I understand it now. War Lopez! War Lenca!

[QUOTE=archiemoore1;20751366]Joey Gamache knows a lot about being too small for another fighter, after Arturo Gatti rehydrated to 2 weight classes bigger and damn near killed little Joey that night[/QUOTE] I re-watched that last night. It's so brutal. He looked out…

Joey Gamache knows a lot about being too small for another fighter, after Arturo Gatti rehydrated to 2 weight classes bigger and damn near killed little Joey that night

[QUOTE=Mister Dad;20750817]So their gonna use lopez size as an advantage? Is lopez bigger than Campbell?[/QUOTE] No, but I'd think Lopez game plan will not be to lay back and throw 30 punches a round like Campbell did. That's not gonna…