Trainer: I Knew Lopez's Talent After Watching Him Spar Rigondeaux

Veteran trainer Jorge Rubio of Cuba was not surprised by the victory achieved by Teofimo Lopez on Saturday night.

Several years ago, in the gyms in Florida, Rubio had witnessed sparring sessions between Lopez and veterans like Guillermo Rigondeaux and Luke Campbell. 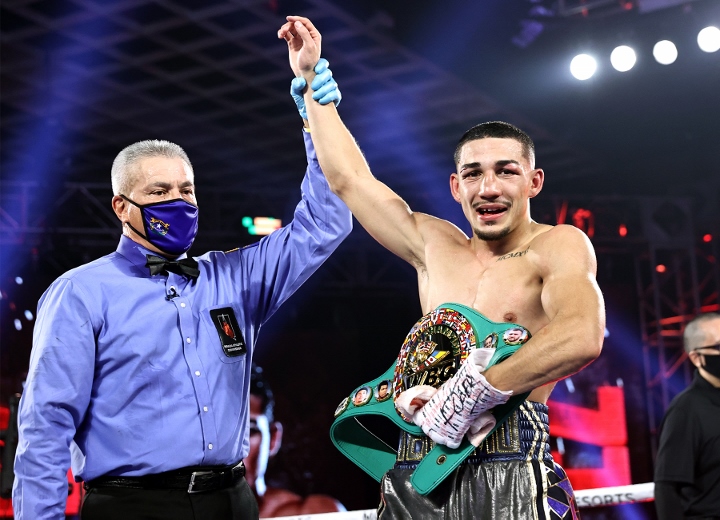 The Cuban coach could not be happier with the success of Lopez, who Rubio met as a child. He said Lopez's father predicted that one day his son would be a great champion.

"I've known him for a long time. I knew what he was capable of, based on what he had done with Luke Campbell and Guillermo Rigondeaux, because from a young age he liked to do sparring sessions with experienced and capable people. He was physically and emotionally prepared for this fight and deserved the victory," Rubio told George Ebro.

"With his hunger and passion, he was able to hypnotize Lomachenko in the early rounds with the jabs and hooks to the body. He had a very good plan and he didn't allow himself be devoured by the big moment or the importance of the fight. That's a tremendous sign of maturity."

From the moment he saw him in the gym, Rubio saw talent right away - based on how Lopez did with Rigondeaux in sparring.

"He did very well, I was impressed," Rubio said. "The sparring sessions with Luke were also good, heated, and this is when he was about 16 or 17 years old.

"People thought he depended on a big punch [to beat Lomachenko] and he didn't. He knows how to box. In the second half I saw him going back a little out of focus, when Lomachenko put a lot of pressure on him. So he has to get better. If Lomachenko comes head-on, he must move to one side. But he knew how to keep Lomachenko at a distance.

"[Lomachenko] knew Teofimo could knock him out in the first four rounds, so he went backwards, because he expected his opponent to come out very strong to take him down. Then [Lomachenko] rose up in the second half, but during that effort he lacked the explosiveness and reaction for the last round that was decisive.''

[QUOTE=TheBoxGod;20826070]Yup alot of fighters knew Lopez was very talneted cause Teofimo Lopez has gone everywhere to get sparring with everyone, so alot of people have seen his talnets but the reputation of lomachenko was so large alot of em still…

[QUOTE=LoadedWraps;20826372][COLOR="Navy"]Good summary. I didn't know Lopez was working with guys like Rigo and Campbell so early. [/COLOR][/QUOTE] He was saying 3 years ago that Rigondeaux only has a left hand. He also sparred Loma around 3/4 years ago and was…

[COLOR="Navy"]Good summary. I didn't know Lopez was working with guys like Rigo and Campbell so early. [/COLOR]

[QUOTE=STREET CLEANER;20826277]I guy that I know that has been in boxing for 40 years told me that he was the real deal and recommended that I start watching him. He never said that about any fighter and for the Loma…