There were two difference makers in the fight - a knockdown scored by Golovkin in the first round, and a bad cut that Derevyanchenko sustained in the second round. 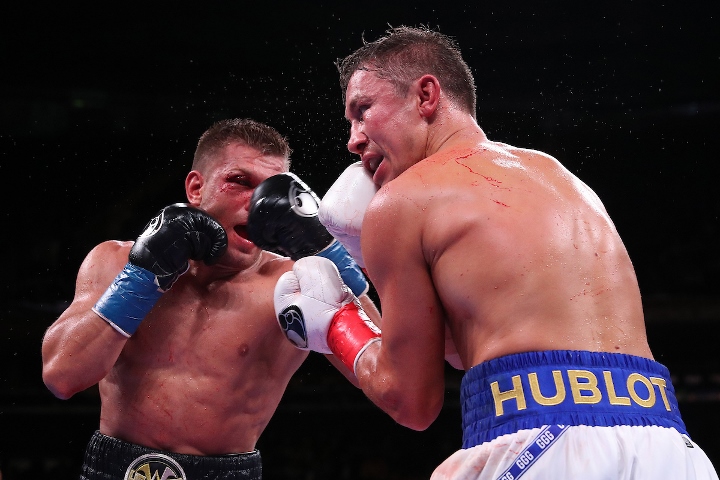 Banks felt Golovkin took away too many punches in the contest and he also failed to let his hands go when needed - with Derevyanchenko outworking the 37-year-old veteran in several key rounds.

Based on the CompuBox numbers, Derevyanchenko landed more shots on GGG than any other opponents they have tracked in the past.

“It’s my fault. I’ve got to get over to him that he needs to do this life or death situation. Either he needs to retire or do it this way. If he can’t do it that way, I hate to see my guys taking all these punches and I know they’re better than what I’m seeing. I take the blame for it. I told them, we’re in for a long night because this kid is one tough customer," Banks told BoxingScene.com.

“When we were starting the fight off, I was trying to get GGG to start the fight off fast, because he’s fighting younger and younger competition. I’m trying to get him to start off faster. You let your hands go, build your own lead, and you can dictate the pace. The first round. You seen the way he got up and reacted. He’s been fighting the way he fights for a while. Getting him to start slipping punches, moving his head, and letting his hands go is difficult.

“These are the type of fights that GGG likes for whatever reason. He wants to please the crowd. I don’t care about pleasing the crowd. I care about my fighter winning and protecting him at all costs. Everyone in this division with titles is younger than him. And if you want to stay with these young boys, you got to do what you’ve got to do. I’m trying to take what GGG already has and add some defense to it and raise his offense output higher. That’s all. Those are two things. The main things are defense and a higher offensive output. Those are the main two things that are damaging for him, and anybody that knows how to move knows it."

Derevyanchenko exposed a flaw in GGG - showing that he has problems fighting going backwards.

Banks recognized that as well, and was pleading with his boxer to stop allowing Derevyachenko from pushing him back.

ggg fought mexican style again, did not respect dervys power and it cost him a lot...

He's right, I'm sure it was said somewhere in here but GGG waits entirely too long to do anything now days. I sat and counted the amount of seconds it takes to get GGG to throw a punch. 10 seconds…

There is a very good Russian boxing channel that was doing a workup on the GGG/SD fight. It went precisely as it was predicted. SD is a freaking monster when it comes to conditioning and punch output... but his power…