Two boxing cards promoted by Top Rank were televised on ESPN this past week. But the primary storyline wasn't the fights which were largely fungible. It was the return of boxing in the Coronavirus Era.

Promoting a boxing match in a jurisdiction with responsible oversight is hard under the best of circumstances. It's more difficult during a pandemic. The Nevada State Athletic Commission and Top Rank put responsible coronavirus protocols in place. Responsible - not foolproof. “That’s the best I can do," Top Rank CEO Bob Arum acknowledged. "I can’t just wave a wand and make everything perfect."

Top Rank also took a step in the right direction when Arum pledged, "If we do it right, then any promoter that wants to look at our protocols and look at what we did, we’re happy to provide them with our protocols. There’s no copyright on it. If they want to see how it should be done, assuming everything goes well, we’re happy to show them. There are about thirty pages. They’re all designed for safety. And we’re happy to share it with our colleagues in the sport.”

That position was in marked contrast to UFC's attempt to keep its coronavirus protocols "confidential," claiming that they were "proprietary information." Coronavirus protocols should be made public for two reasons: (1) If they have flaws, the flaws should be spotted and corrected; and (2) If they're well-constructed, state athletic commissions and other promoters can learn from them.

Top Rank's fight cards took place on June 9 and June 11 in the Grand Ballroom at the MGM Grand in Las Vegas. There were no spectators other than those in the room on official business. Here, it might be noted that empty rooms are not uncommon at fights. When Oscar de La Hoya fought Floyd Mayweather at the MGM Grand Garden Arena in 2007, there were fourteen paying customers in the stands when the first bout began.

Ring announcer Mark Shonuck performed his duties on June 9 and 11 from outside the ropes. It was nice to see fighters in the ring without sanctioning body officials jostling with commission personnel to be on camera while entourarge members surround their fighter shouting "you're the man." Stitch Duran and Mike Bazzell worked in opposing corners as cutmen for each of the fights except in instances where a fighter's trainer or assistant trainer doubled as his cutman.

ESPN's announcing team was situated with safety in mind. Blow-by-blow commentator Joe Tessitore called the action from a studio at ESPN headquarters in Connecticut. Tim Bradley, Andre Ward, and Mark Kriegel offered analysis from their respective homes. Roving reporter Bernardo Osuna was the only on-camera member of the announcing team positioned on site.

A supporting bout for the June 9 card was scratched when Mikaela Mayer (who was scheduled to fight Helen Joseph) tested positive for COVID-19. That left five fights.

Cuban Olympic gold medalist Robeisy Ramirez knocked out a grossly overmatched Yeuri Andujar at 54 seconds of round one.

Quatavious Cash won a unanimous decision over Calvin Metcalf in a bout that went to the scorecards after being stopped as the result of a cut caused by an accidental head butt.

Italian heavyweight Guido Vianello took on 294-pound Don Haynesworth, who looked as though he wasn't in shape to shadowbox - let alone, fight - for the scheduled six-rounds. Conditioning became a moot point when the first solid right hand that Vianello landed ended matters at 2:16 of round one.

After that, heavyweight Jared Anderson mercilessly pounded Johnnie Langston before stopping him at the 1:55 mark of the third round.

That set the stage for the main event: WBO 126-pound champion Shakur Stevenson vs. Felix Caraballo in an over-the-weight non-title bout. 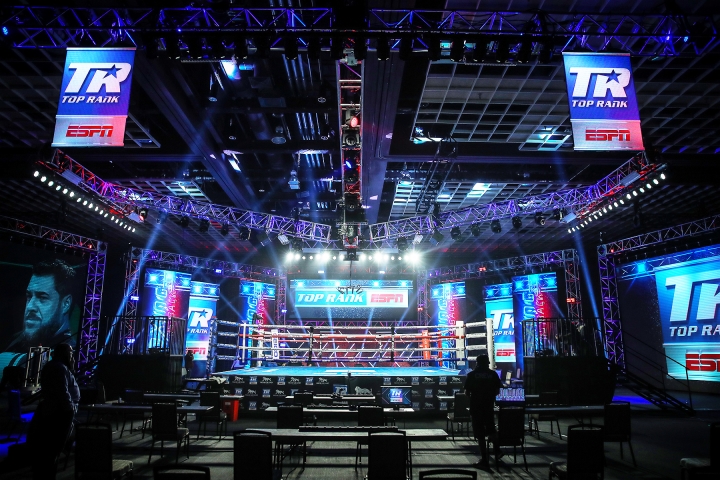 Stevenson is a good, well-schooled fighter who has made his mark in the professional ranks against light-punching slow opponents. Caraballo, who works in a supermarket and took the fight on less than four weeks notice, fit that mold. Asked during a pre-fight media conference call whether he'd watched video of Caraballo, Shakur answered, "I watched like one round. I seen everything I needed to see in that one round. He's nowhere near on my level."

As expected, Stevenson dominated from start to finish, ending the beatdown with a well-placed body shot at 1:31 of round six.

Top Rank's June 11 fight card was more competitive. Adam Lopez opened the show with a majority decision over Luis Coria in a spirited fight. Then, after Gabriel Muratalla blew out 40-to-1 underdog Fernando Robles in the first round, Eric Mondragon and Mike Sanchez fought to a four-round draw. In main event, Yenifel Vicente was knocked down twice by Jessie Magdaleno and penalized four points for low blows before being disqualified in the tenth round.

First, let's repeat what was said earlier in ths article. Promoting a boxing match is hard under the best of circumstances. It's more difficult during a pandemic.

Within that framework, the fight cards and telecasts were implemented in a professional manner. It might have seemed strange to viewers for the announcing team call the fights from offsite TV monitors. But HBO and Showtime commentators have done the same thing in the past. And Epix's announcing team called fights from a studio in New York throughout the network's two-year boxing run.

The absence of an onsite crowd took away from the drama. Crowd response adds to the excitement of a good fight. It's one of the reasons that telecasts sometimes originate from the home town of a main event fighter.

The bigger problem - particularly with regard to ESPN's June 9 show - was the quality of the fights. The introduction at the top of the telecast declared that "bigtime boxing" was back. But June 9 wasn't bigtime. The fights were gross mismatches with odds like 40-1 (Stevenson-Caraballo), 35-1 (Anderson-Langston), and 30-1 (Vianello-Haynesworth). In five fights, the underdog won zero rounds.

Shows like this leave boxing's fan base with a sour taste in its collective mouth. According to Nielsen Media Research, the June 9 telecast was watched by an average of only 397,000 viewers with a peak viewership of 609,000. These are poor numbers. The totals for June 11 were worse: an average viewership of 311,000 with a peak of 392,000.

Also, at times, the ESPN telecasts toyed with boxing fans in a particularly aggravating manner. For the first half of the June 11 telecast, viewers were told to stay tuned for a major announcement from Tyson Fury regarding his upcoming fights. But the major announcement turned out to be nothing more than a statement from Fury that he intended to fight Deontay Wilder next and that the Fury and Anthony Joshua camps had loosely agreed upon the parameters for two fights to be contested in 2021. All of that had been previously reported. And as Fury conceded, "Nothing is really set."

The ESPN announcing team also went overboard in hyping Shakur Stevenson as "the next Floyd Mayweather" and "the best young fighter on the planet" with the promise that "he's gonna be the number one pound-for-pound fighter in the world for certain."

Stevenson is a talented young fighter. He'd be well-matched against Gary Russell Jr. But there are other young fighters who show just as much, if not more, potential. And before anyone gets too upset by that declaration, consider the following,

ESPN's panel of twelve "experts" (which includes TV commentators Joe Tessitore, Tim Bradley, and Andre Ward) doesn't list Stevenson among its top ten pound-for-pound fighters, nor was Shakur among the other eight fighters who received votes in the ESPN.com poll.

Stevenson is not listed among the twenty fighters who received votes in the Boxing Writers Association of America pound-for-pound rankings.

Boxing Scene doesn't list Stevenson in its top-ten pound-for-pound rankings or among "five more who could easily be here" or "five for the future."

Maybe the hype on ESPN will have an effect and Stevenson will get some votes the next time around. But going six rounds against Felix Caraballo isn't a credential that should lift anyone into the pound-for-pound conversation.

Also, the ESPN commentating team repeatedly made the point that Stevenson wants to become boxing's premier attraction "without having to play the villain role." In that regard, a look at the following link might be instructive:

Perhaps Stevenson's thinking has evolved in a positive way since this incident in a Miami Beach garage occurred two years ago and he has become a model citizen. But I haven't heard him address what happened that evening in a meaningful way.

As for boxing's immediate future; there will be at least two Top Rank cards each week on ESPN in the months ahead. Showtime is expected to return to the ring in late July or early August. FOX's schedule will depend in part on when Major League Baseball reappears, but the network is said to have okayed a card headed by Thomas Dulorme vs. Jamal James on July 25. DAZN, given its financial problems, is also likely to reenter the waters with a less-than-big splash. Fights cards will be held without spectators in attendance for the foreseeable future,

"We’re probably going to be doing this for three months," Bob Arum told Boxing Scene with regard to the present formula. "It’s one step at a time. We have enough on our plate to start the first two weeks with non-title fights. By the third week, we’ll be doing some more world title fights and more in July. Probably by August, we’ll be doing some big heavyweight fights and significant world title fights. But people have got to understand that we don’t have experience in what we’re doing here. Nobody does. Better to go slow and be on solid ground than to just rush ahead and fuck everything up."

Translation: It will be a long time before boxing fans see the fights that we want to see.

There's an oft repeated tale about Joe Namath, the charismatic quarterback who led the New York Jets to an upset of the mighty Baltimore Colts in the 1969 Super Bowl in a game that established parity between the NFL's warring factions. Namath had an eye for women and a sexual appetite to match. One night, he and running back Ed Marinaro were in a hotel lounge at closing time. A woman, not particularly attractive, was alone at the bar. Namath went over to her. They exchanged a few words. Then he returned to Marino and said, "I'm going upstairs with her. I'll see you in the morning."

Boxing fans; get used to it. Miss America ain't coming in. Not anytime soon, anyway.