As weekly boxing content on ESPN platforms will continue through Halloween, so too will the relationship with the company responsible for providing crowd noise in real time.

The relationship between Top Rank and HearMeCheer—a state-of-the-art audio broadcast app that streams live fan cheers into venues and televised sporting events—will now extend through the end of October, the two companies recently announced. The relationship began with the infancy of Top Rank’s summer boxing series, live on ESPN from the MGM Grand Conference Center (“The Bubble”) and will continue into the heart of Top Rank’s upcoming boxing schedule.

“HearMeCheer delivered authentic, live fan reaction and crowd noise during our events, bringing the fans closer to the matches, almost as if they were in the arena with us,” Brad Jacobs, chief operating officer of Top Rank told BoxingScene.com. “HearMeCheer proved to us it can be done, and our telecasts are greatly enhanced by this new way to engage our fans.” 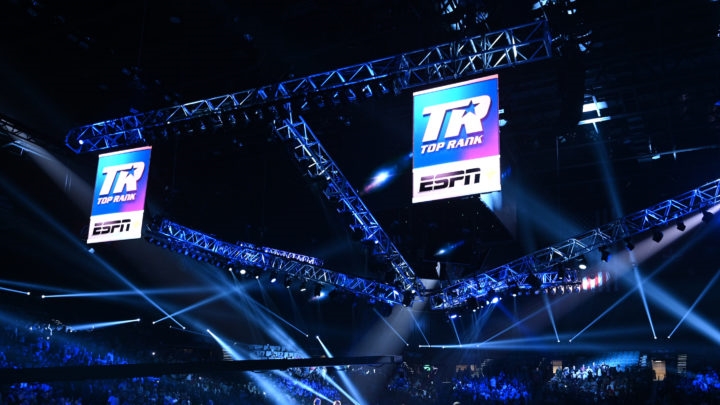 The live audio is produced through the company’s app and website, where fans log on and literally begin cheering into a microphone. It is turn pumped into the venue and televised platform of choice, offered as a necessary alternative to offset the dilemma of presenting live boxing content without the benefit of having fans in attendance.

Other major sports—including Major League Baseball (MLB) and the National Basketball Association (NBA)—have incorporated such fan reaction along with fake patrons in attendance.

Top Rank’s events have been come with the visual accompaniment of jumbo screens and posters showcasing some of the sport’s most memorable events in its best efforts to otherwise fill up an empty ballroom. Such ambiance along with the proper lighting has helped detract from the lack of live attendance, though there still existed the demand to best simulate the way sports were pre-pandemic.

“Top Rank challenged us to enable fans and viewers to hear and feel as though the arena was full, but at the same time not deliver audio that detracted from the telecast,” noted Andersen. “They wanted the fans to participate live in the event.

“We launched the HearMeCheer app through viewer cellphones, as suggested by the announcers on location in on-air promotions during the broadcast. The result was live audience reactions and sounds captured through HearMeCheer and ‘piped’ into the production at the MGM Grand Conference.”

The relationship between the two entities will continue through October 31, which will mark eleven straight weekends worth of live boxing content on ESPN platforms.

Not a fan of the canned noise. It's more of a distraction than anything.

As I’m hearing all the “crowd cheering” it’s reminiscent of these sports video games. It’s too fake and you know it’s fake because the fight can be boring and you’re still gonna hear cheering when in reality you would hear…

I rather listen to the cornermen and trainers talk. The pumped in noise is crap.

[QUOTE=Al Broker;20750367]I like PBC. Their sound mixers to recreate the live scenario is good. Mike Montero and Breadman were speaking about it recently and PBC does it the best. They’re all prerecorded sounds and mixed and timed right during the…

[QUOTE=Squ□redCircle34;20750357]The BobFather should send Haymon a steak with pea king duck for the idea cuz PBC was first with that![/QUOTE] I like PBC. Their sound mixers to recreate the live scenario is good. Mike Montero and Breadman were speaking about…