At the very least, Thurman knows their 12-round, 147-pound championship match will provide consumers with much more entertainment than Pacquiao’s previous fight. Pacquiao pounded out a convincing, unanimous-decision victory over Adrien Broner in that January 19 bout at MGM Grand Garden Arena.

The 40-year-old Pacquiao hurt a reluctant Broner twice – in the seventh and ninth rounds – yet failed to become the first opponent to knock out the former four-division champion. Thurman thinks Pacquiao wants to give faithful fans more value for their money following that mostly monotonous 12-rounder six months ago. 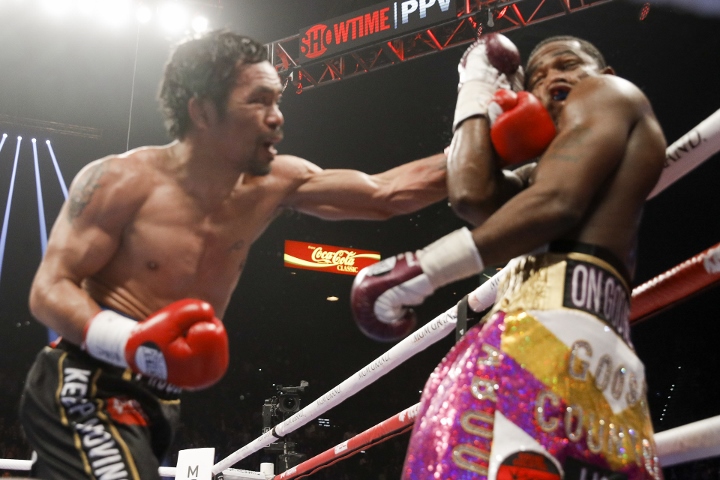 “I think, ultimately, the truth boils down to this – Manny Pacquiao’s last fight was B.S.,” Thurman said Wednesday following a press conference at MGM Grand. “It was not entertaining. He knows it. He was happy to win, but he was not happy as a fighter because he truly cares about the fans. Without the fans, Manny Pacquiao doesn’t make $30 million, hundreds of millions of dollars throughout his career. He understands that the fans have allowed him to live a lavish lifestyle. So, he always contributes to the fans, and that is admirable. So, he wants to have a great fight this year, a fight more exciting than the fight in January. He does not want a repeat. And he knows that not only can he fight Keith Thurman, who’s an undefeated welterweight champion – yes, coming off of some injuries, but already brushed the dust off with a comeback fight.

“I’ve had a way better training camp for this. Manny Pacquiao is staring down my title. My title’s on the line. I beat Manny Pacquiao, I’m not putting that title over here [to the side]. I’m already the super champ. I don’t need no regular title. I’ve been there and done that. We’ve done upgraded. Pacquiao, the last time he tried to achieve this in his professional career, he lost to Floyd Mayweather. This time he’s losing to Keith ‘One Time’ Thurman. Pacquiao’s done many things. He’s accomplished greatness. But he will not beat a super champ.”

Thurman’s last fight, which took place one week after Pacquiao beat Broner, provided some drama, particularly in the seventh round.

Josesito Lopez hurt the heavily favored Thurman badly during that round and nearly knocked out the unbeaten WBA “super” welterweight champ. Thurman managed to fend off Lopez over the final 1:40 of that seventh round and seemed to recover before the eighth round began.

The Clearwater, Florida, native went on to win a majority decision January 26 at Barclays Center in Brooklyn. Surgery on his right elbow and a deep bruise to his left hand kept Thurman from fighting for 22 months before he opposed Lopez (36-8, 19 KOs, 1 NC).

This is funny, I must admit. Thurmos barking how Pac's Broner fight was boring... when Pac had Bonehead badly hurt in 2 rounds. Meanwhile, Thurmos was jolted in a huge way vs Lopez. Nearly stopped. Then he carefully survived the…

Oh yes ...ur big fights against Garcia and Porter were real barnburners with so much drama, toe to toe action, multiple knockdowns- NOT!!!

[QUOTE=wrecksracer;19917194]Run Time isn't exactly Mr Excitement.[/QUOTE] Seriously. It's like people forget because he talks a big game and he had a few decent knockouts like 5 years ago. Every time he fights it's just him circling the ring for 80%…