Thurman: No Third Fight In 2019; 'Gotta Relax' After Pacquiao

His pay-per-view showdown with Manny Pacquiao on July 20 will mark Thurman’s second fight in less than six months. After nearly two years out of the ring, Thurman is eager to get in a second fight this calendar year, especially since it’ll earn him the biggest purse of his 11-year professional career.

The timing of the Pacquiao fight would allow Thurman to box a third time before 2019 ends. The WBA “super” welterweight champion doesn’t plan to do that, though, no matter what happens when he opposes Pacquiao at MGM Grand Garden Arena in Las Vegas.

“A third time this year?,” Thurman asked after a press conference Tuesday at Gotham Hall in Manhattan. “No sir, no sir. We get this job done, shoot, we’ve gotta relax. You know? I’m very happy to stay active and I would love to continue to perform twice a year, instead of the slow rolling that I was doing when I was champion, when I fought Shawn [Porter] for once that year [in 2016] and I waited for the Danny [Garcia] fight. I could stay busy, you know? It depends on how I feel, but I’m not projecting a third fight this year. No, sir.” 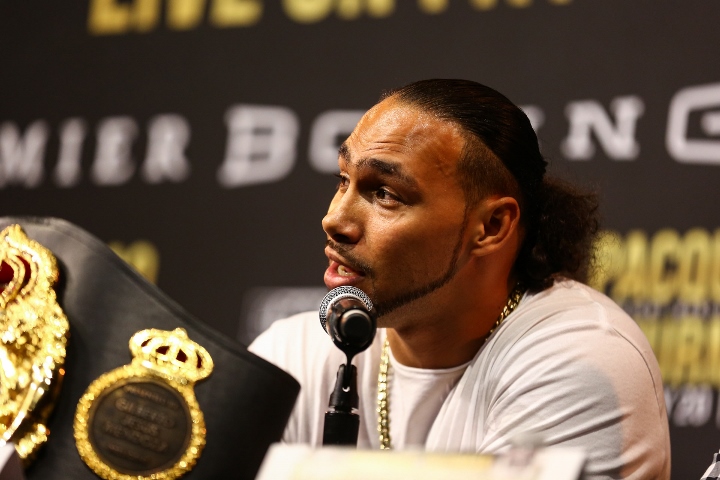 Thurman’s majority-decision defeat of Josesito Lopez on January 26 was his first fight in 22 months.

He had surgery to remove calcium deposits from his right elbow in April 2017, a month after he edged Garcia by split decision in their 12-round, 147-pound title unification fight at Barclays Center in Brooklyn. Thurman (29-0, 22 KOs, 1 NC) later suffered a deep bruise to his left hand, which caused his return, initially scheduled for last May 19, to be delayed eight months.

The 30-year-old Thurman admits it took him quite some time to come down from 183 pounds, his highest weight during his long layoff. The Clearwater, Florida, native expects to be in much better shape when he opposes Pacquiao than when he fought Lopez, who hurt Thurman badly in the seventh round.

A fight against IBF welterweight champ Errol Spence Jr., assuming Spence beats Porter, could be next for Thurman if he defeats the 40-year-old Pacquiao. Thurman declined to discuss facing Spence (25-0, 21 KOs) or anyone else, other than Pacquiao (61-7-2, 39 KOs).

“There is no plans past Pacquiao,” Thurman said. “Get this fight in, perform, have the best camp of my life, living my best life, be the best Keith Thurman I can be. And we’ll just go from there – one fight at a time. We are not looking past Manny Pacquiao, not for one second.”

[QUOTE=WhatDisButtonDo;19766095]Man your Signature is simple but some real ish. Paul was a great ambassador for the sport, miss dude.[/QUOTE] It always matters more when a person who has really lost something can be positive like that. It reminds me not…

Definitely rooting for Manny in this one. Keith doesn't seem to want it no more. Just their for an easy pay cheque.

Funny thing is 40 year old Pac said he wants to fight again at the end of the year.