Thurman: If Pacquiao Wins, I'd Probably Retire - Bow Down

Thurman wants to do what Pacquiao did to Oscar De La Hoya in 2008. Pacquiao knocked out the legendary fighter in eight rounds and went on to have a legendary career of his own. De La Hoya never fought again and became a promoter.

Thurman envisions a similar outcome with him catapulting into superstardom and Pacquiao disappearing from the fight game. But what happens if the 40-year-old fighter defeats Thurman? 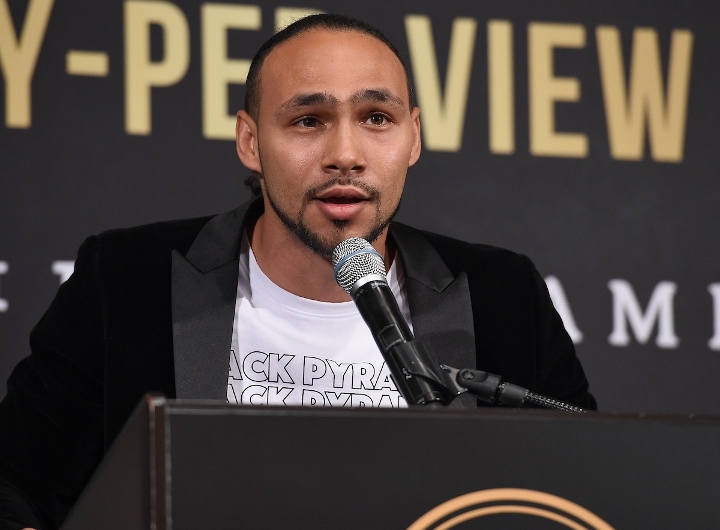 Thurman said Wednesday he would consider retirement, and he already has a second career in mind in case he were to lose to a fighter 10 years older than him.

It’s highly doubtful that Thurman would call it quits and shift toward a full-time TV analyst gig if he were to lose to Pacquiao. But after fielding the farfetched question Thurman saw an opportunity to sell the highly anticipated bout. A loser-leaves-town match might lure a few more fight fans to fork over PPV money.

Thurman was filled with many one-liners during the second leg of back-to-back news conferences at The Beverly Hills Hotel to promote the summer showdown.

“This is what you call interview bars, OK. I’m not a rapper. I’m not an actor. I’m a world class fighter. I know the fight game, OK. Blood sweat and tears for 23 years.”

Pacquiao said he’s used to facing fighters who like to rhyme and trash talk. But the Filipino senator believes that Thurman will back up his talking in the ring. He’s just not sold on this being his last fight.

“I told him I’m not Oscar De La Hoya,” said Pacquiao, who began his professional career 24 years ago when Thurman was six years old. “I’m different than (De La Hoya). The way I work hard. The way I prepare for my fight. I’m still motivated. The desire is still there 100 percent.”

[QUOTE=MulaKO;19766631]C’mon man , making it sound like this or that has not crossed their minds I totally get what your saying but I tend to disagree I think Manny will overwhelm him , he’ll be stunned from all the angles…

Thurman's comments remind me a little of Victor Ortiz. “Pshh … probably,” Thurman said when asked about retiring if Pacquiao beats him. “I’d at least think about it. I’d at least be like, ‘Can I do some more commentating or…

[QUOTE=giant_king;19766316]If pac wins,we really need to upgrade are PED testing.theres no way pac should be winning at this level at his age[/QUOTE] Why not? So if he wins you're already gonna use PED's as an excuse? People find all ways…

Practice your retirement speech now so you don't trip up in the post-fight after Pac stops you.