Thurman: I Want Pacquiao Rematch, Our Fight Was a Draw!

Keith Thurman is eager to get back in the ring for a rematch with Manny Pacquiao.

Last month at the MGM Grand in Las Vegas, Thurman was dropped and suffered a twelve round split decision loss at the hands of Pacquiao, who in the process captured the WBA welterweight championship. It was Thurman's first career defeat.

The victory was highly praised, as Pacquiao - now 40-years-old - was initially pegged as the underdog in the contest. 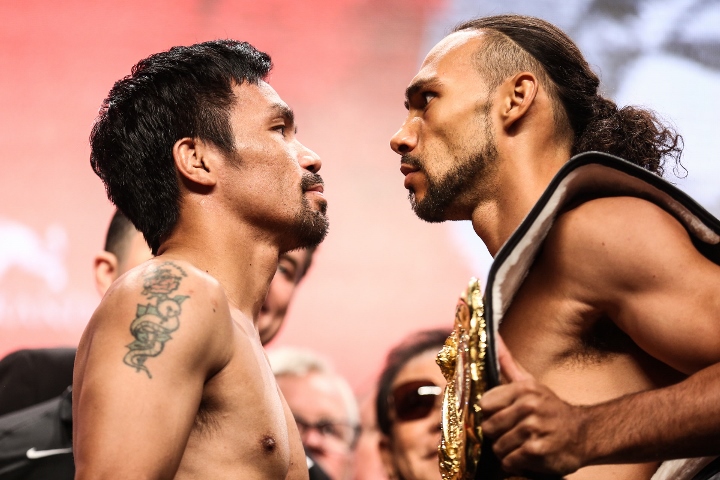 Thurman does not agree with the scorecards. He believes the contest should been tallied as nothing more than a draw.

"I'm ready for the rematch. He just got off to a good start, I was behind, and he was just a little bit calmer than I expected Manny Pacquiao to be. At his age, he's calming down, he's not taking chances like a young fighter. He's smarter, he's been through it all," Thurman told TMZ Sports.

"I still got a lot of respect for him. I still think the fight was nothing more than a draw. I don't really think he won the fight. I know it was hella close, sometimes it's a coin toss.. but a coin toss is sometimes 50-50 and you gotta pick heads or tails."

And Thurman has no problem with doing that fight next. Pacquiao is not expected to fight again until the first half of 2020.

"Why not? I think it's the best fight of the year. I might have to go the Philippines and we'll need to talk in person. I might have to do that. Apparently the Philippines loves me now. They are big fans of Keith Thurman out there. Before they weren't. Now they love me. They loved the fight, they loved the action, it wasn't the Floyd Mayweather fight [with Pacquiao], it wasn't the Adrien Broner fight [with Pacquiao], it was a real deal championship boxing match," Thurman said.

[QUOTE=JLC;19967859]You know a mfer knows he lost when hes out here making a case for a DRAW. LOL! Come on Keith, stop the shenanigans! How the hell was it a draw when you got dropped ? Without a judge scoring…

Quote: Originally Posted by PunchyPotorff Wasn't all that close. Pac won decisively. And wouldn't matter if it was razor thin close. Pac won. End of story. Get over it. [QUOTE=j.razor;19983899]I can't, what I saw was a lie that you are…

[QUOTE=PunchyPotorff;19983057]Wasn't all that close. Pac won decisively. And wouldn't matter if it was razor thin close. Pac won. End of story. Get over it.[/QUOTE] I can't, what I saw was a lie that you are telling me. :doh:

[QUOTE=j.razor;19982117]It was real close.[/QUOTE] Wasn't all that close. Pac won decisively. And wouldn't matter if it was razor thin close. Pac won. End of story. Get over it.