Keith Thurman has wanted it for a while.

Now 30, the thoughtful Floridian was still six months away from 26 when he made the rounds at the Mayweather-Pacquiao weigh-in, telling anyone who’d listen that a big fight was on his agenda.

It made perfect sense at the time. He was the World Boxing Association’s champion in waiting back then, toting around the organization’s dubious “regular” welterweight belt and hoping the winner of the pay-per-view extravaganza would call his name for a blockbuster dance.

Needless to say, it hasn’t happened.

Instead, Mayweather finished his Hall of Fame resume with Andre Berto, while Pacquiao sandwiched a brief retirement amid the likes of Tim Bradley, Jessie Vargas, Jeff Horn and Lucas Matthysse – before convincingly returning to relevance with a recent scorecard rout of four-division windbag Adrien Broner.

Meanwhile, Thurman’s own stock has regressed, thanks to myriad injuries that have cost him months and years at a time, and allowed past victim Shawn Porter to reach title-holder status along with subsequent 147-pound interloper Terence Crawford and prospect-turned-preeminent Errol Spence Jr.

The Ring Magazine rankings for December, in fact, had Thurman third in the division, trailing the latter two unbeatens while residing a single slot ahead of Porter – whom he edged in the summer of 2016.

Crawford and Spence are on the publication’s pound-for-pound list, too, occupying positions two and 10, respectively, while Thurman, who’s also unbeaten in 29 fights of his own, is nowhere to be found. 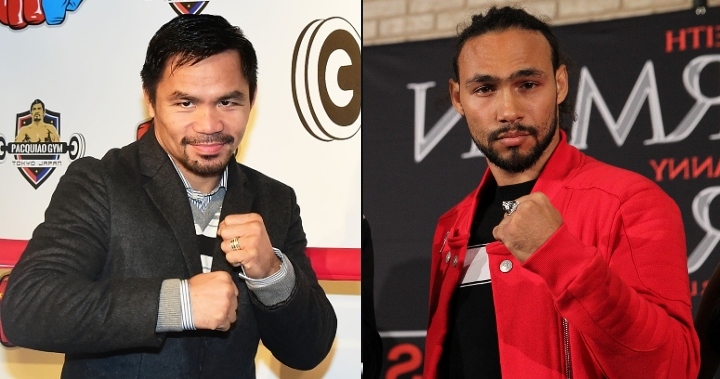 So, after ending a 693-day hiatus with a hard-earned nod over Josesito Lopez last weekend, it was hardly surprising to hear the man labeled “One Time” to renew his call for the big time.

In the form of, you guessed it, Pacquiao.

“I would most likely definitely take the Manny Pacquiao fight this year,” he said, while still thanking fans from the ring at Barclays Center. “I feel good. I’m ready to fight wherever Pacquiao wants it.”

The former lightweight champion is now a member of the Fox Sports broadcast team which called the Thurman-Lopez fight, and he told Boxing Scene that it’s indeed wise for Saturday’s winner to strike while the iron is hot.

An admittedly rusty Thurman earned comfortable margins – by four points and eight points – on two of three scorecards in Brooklyn, and even though a third tallied a ridiculous draw, he believes another level or two exists that’d get him on even ground with the version of Pacquiao who won eight, eight and nine rounds across the board against Broner.

Thurman landed 247 punches to 117 for Lopez, including 168 power shots and a knockdown.

Veteran trainer Freddie Roach told Boxing Scene the Filipino star would prefer a rematch with Mayweather, but, should “Money” decide against another return, he assured that any number of young welter guns are on the radar.

“All the best guys out there,” Roach said. “If (Manny’s) gonna continue in boxing, I want him to fight the best guys he can. We’re not looking for any stiffs or any easy fights or anything like that. We will fight anybody out there. If Floyd doesn’t come … all of them. Line them up.”

Mancini, who defended his WBA lightweight belt four times by stoppage from 1982 to 1984, said he sees Spence – who’ll turn 29 in early March – atop the division after all the big matches shake out.

The Texan will defend against unbeaten four-division champ Mikey Garcia on March 16.

“That is a loaded division but I think Spence is the best of them all,” Mancini said.

WBO featherweight title – Frisco, Texas
Oscar Valdez (champion/No. 4 IWBR) vs. Carmine Tommasone (No. 14 WBO/Unranked IWBR)
Valdez (24-0, 19 KO): Fifth title defense; Six KO/TKO fights in six fights in Texas (21 total rounds)
Tommasone (19-0, 5 KO): First title fight; First fight outside of Italy
Fitzbitz says: OK, you tell me. One guy has three legit wins over top-10 featherweights. The other has never fought outside Italy. Does it get any easier than this to pad the picks record? Valdez in 9 (99/1)

[QUOTE=jinx_htx;19471948]Freddie roach talking all that sheet, biatch please! They just want Thurman because he looks vulnerable after almost getting ko'd by Lopez. If Spence kills Mikey Garcia I bet Manny's team aren't going to be saying "line them up". I…

[QUOTE=Bluebird;19495775]Of course I saw Pac did the same thing for a while but he still became one of boxing’s biggest cash cows, didn’t he? And you have to realize Arum is a great manipulator, he made Pac believe that it’s…

[QUOTE=Bluebird;19481086]The Malaysian financiers paid him Good money to fight Matthysse and he co promoted it with Golden Boy Promotions. After that he signed up with Haymon to fight Broner (he made good money too ) but something big is coming…