Thurman: Comeback vs. Lopez Evidence Of How Great I Truly Am

Keith Thurman understands why so much has been made about the surprising seventh round of his fight against Josesito Lopez.

Thurman knows how it must’ve looked from the outside of the ring, looking in. It appeared that Lopez, a huge underdog, was about to knock out the unbeaten WBA welterweight champion in Thurman’s first fight in nearly two years.

It was what happened thereafter, however, that Thurman treasures. The 30-year-old Thurman withstood Lopez’s onslaught over the final one minute and 42 seconds of the seventh round January 26, regained his composure, took command of their fight again and won comfortably on two of the three scorecards at Barclays Center in Brooklyn (117-111, 115-111 and 113-113). 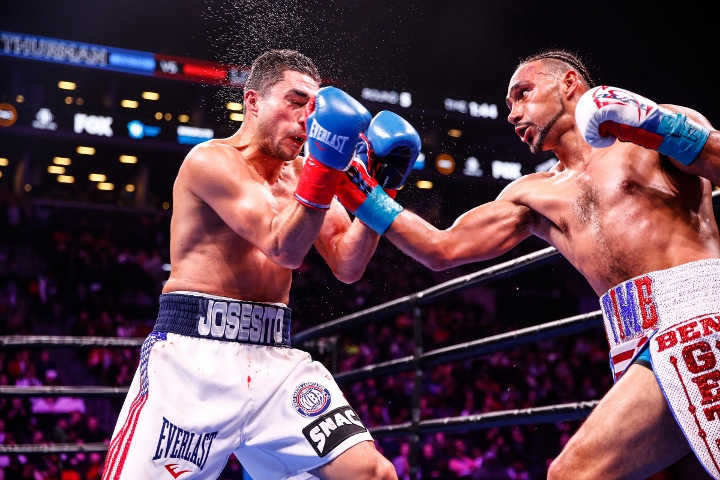 Much has been made of the trouble Thurman experienced that night during the buildup toward his July 20 fight with Manny Pacquiao, but that’s fine by Thurman.

“And I said, ‘Damn it, you better put your hands up, you better move your feet, because only you know you’re OK right now. The whole world thinks you’re about to get knocked the f*** out, boy. The whole world thinks you’re about to be knocked the f*** out. Get out this round, and let’s show ‘em what kind of champion you really are.’ So, it ain’t about too much talk, not enough talk. It is what it is. It probably was one of my most vulnerable rounds in my career to date.”

It was the most vulnerability Thurman has shown since Luis Collazo caught him with a left to his body during the fifth round of a fight Thurman eventually won by technical knockout in July 2015. Just like he did against Collazo, Thurman taught skeptics something about his resilience versus Lopez (36-8, 19 KOs).

“A lot of fighters would not have been able to get out of the round in the way that I did,” Thurman said. “And, to me, it’s just evidence of how great I truly am. Because greatness, you know, they have a saying in boxing – it’s not about when you get knocked down. It’s about what you do when you get back up. But I don’t even let you put me down. So, it is what it is, man. It’s just boxing. It’s just another black eye. It’s just a sport, baby. I go a 0 and I’m not afraid to let it go. If you can beat me, beat me. Josesito Lopez had it right there, in front of his eyes. He couldn’t close the deal. He couldn’t close it.”

[QUOTE=lion33lit;19906082]Thats why I stressed "imo".....but I've gotta take you up on your "boxing clinic he put out against Garcia?"(??) Garcia came in as moving manniquin extraordinaire - he was too small, too limited and physically WEAK compared to the naturally…

[QUOTE=Sledgeweather17;19905907]Everything you said was fine until the very last part. Did you just include Spence in the brawling for machismo sake? Bro you seriously need to retract that. Didn't you watch the boxing clinic he put out against Garcia? Did…

[QUOTE=lion33lit;19898919]Well said Sledgeweather, I do think we're on the same page though. "Clinching" might just have to come into play if an opponent is tougher than usual. Hey, If I can see flaws in Spences game, imagine what Thurman &…

[QUOTE=jvsnypes;19891296]The question no one is asking is what happens if Spence ever gets hurt??? We don’t really know. We do know how Thurman reacts when hurt. He comes back and wins. What happens if Thurman hurts Spence??? What happens if…