First there was a rematch.

Soon there will be another.

Rightfully, much of the boxing world is focused on the heavyweight division. WBC titlist Deontay Wilder scored another sensational knockout last weekend in his return engagement with Luis Ortiz. In one week and change, we all get to find out what happens when WBA/IBF/WBO titlist Andy Ruiz and Anthony Joshua share the squared circle again.

Boxing won’t cease in between.

Based on the weights of the four big men, hardcore fight fans will look more than 100 lbs. lower on the scale on Saturday and find what looks like a gem with serious implications. Akin to the action at the top of the scale, it’s a fight that could be leading somewhere even bigger.

31-year old WBO bantamweight titlist Zolani Tete (28-3, 21 KO) of South Africa, also a former IBF titlist at Jr. bantamweight, will attempt the fourth defense of his belt in what is likely the toughest defense he’s had to date. 30-year old Johnriel Casimero (28-4, 19 KO) of the Philippines is a former IBF light flyweight and flyweight beltholder on a roll. Casimero has scored four straight stops since a stunning upset loss to Jonas Sultan in 2017.

It’s easy to call most title fights must-win for the combatants but this one really feels that way. Casimero has worked towards another big fight since leaving flyweight behind in 2016 and arrives in the title mix at a loaded moment for bantamweight. 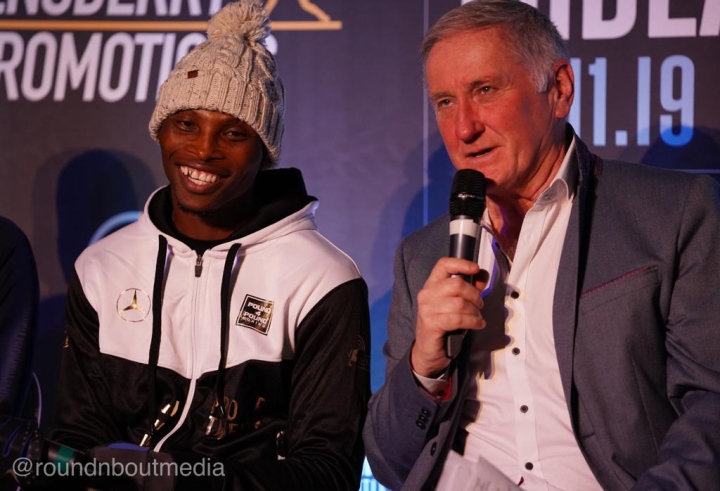 The network is getting into the 118 lb. mix ahead of Inoue’s arrival this Saturday (ESPN+, 2 PM EST) with this clash. The winner of Tete-Casimero will be in line for possible unification next year. That’s bigger money, more eyes, and more attention than either Tete or Casimero has ever really experienced.

Casimero has experienced a lot of other interesting stops on the road. Both he and Tete received their sole knockout losses from the same man, South Africa’s Moruti Mthalane, in flyweight title attempts. Mthalane stopped both in round five but there’s no shame there. Mthalane, now 37, hasn’t lost since suffering a cut stoppage in a highly competitive bout with Donaire in 2008.

After his loss to Mthalane, Casimero moved back down the scale to win the interim (later full) IBF 108 lb. belt in a memorably foul-filled affair with Luis Lazarte. Lazarte is often recalled as a dirty fighter but there was two-way rule bending on the night. Both men were deducted multiple points along with trips to the deck for both, culminating in a riot that spread from the crowd to the ring when Casimero finally emerged victorious.

There was no riot in Casimero’s 2015 challenge of then-IBF titlist Amnat Ruenroeng. Like Lazarte, Ruenroeng developed a reputation for fouling and he did plenty of it that night while also scoring some knockdowns along the way to win what was a controversially officiated fight. Casimero knocked him out in four rounds of the rematch.

It’s hard to imagine the Tete fight turning as bizarre.

Tete has won twelve straight and developed into a mature boxer-puncher with dimension problems for most of the men near his weight. At 5’9, and with a 72” reach, Tete is a smart southpaw with pop who can control fights at range and bang in close when he has to. Tete is also a man trying to make up for lost opportunities.

When the WBSS began, Tete was favored by most to be headed toward Inoue in the final. After a lopsided quarterfinal win, a shoulder injury forced Tete out of his semi-final with Donaire the week of the fight. When he enters the ring Saturday, it will be Tete’s first fight since October of last year.

Might Tete be holding three major titles right now if he’d been able to stay in the tournament? Would Donaire have upset him before the final? Was the cancellation just a delay of a defeat at the hands of Inoue?

The last of those questions might be within sight. Tete has made clear he wants a crack at the Japanese juggernaut. A win over Casimero would clear a mandatory obligation and pave the road to a showdown.

Whether Tete would get the first crack at unification with Inoue remains to be seen. Oubaali defeated Inoue’s brother Takuma on the Inoue-Donaire show, has also expressed a desire for the fight, and the family angle is an easy sell.

As long as everybody stays wanting to fight, any order will do.

Casimero would figure in just as easily if things go the way he wants. This weekend’s challenger hasn’t been shy about wanting Inoue either.

Will Tete’s boxing ability keep his winning streak alive or will the offensive minded Casimero insert himself into the mix? They’re good questions in a good division and we’ll have the answers before the week is out.

Great even with this kind of match-up, Mthalane’s name shines through for being the man who beat both champs. And there comes Donaire who beat that man

[QUOTE=dot.c.eh;20217141]Not a good look for visitpanama.com[/QUOTE] [img]https://i.imgur.com/sur4RZT.gif[/img] John Riel Casimero is in greater danger in the UK, you got those crazy Gypsy's that show up to Billy Joe Saunders events ; you got UKAD, then the horrible judging. Casimero probably…

[QUOTE=1hourRun;20217124][img]https://i.imgur.com/Op5MpEN.gif[/img] When John Riel Casimero shows up, trouble follows! Casimero may have to get very physical with Zolani Tete for the upset, maybe even bend the rules a bit like he did against Luis Lazarte. Nonito proved he is still…

[img]https://i.imgur.com/Op5MpEN.gif[/img] When John Riel Casimero shows up, trouble follows! Casimero may have to get very physical with Zolani Tete for the upset, maybe even bend the rules a bit like he did against Luis Lazarte. [QUOTE=Cliff]Might Tete be holding three…