It wasn’t too much, too soon for Terri Harper after all.

Scores were 99-90 twice and 98-91 in favor of Harper, who came in as the International Boxing Organization (IBO) titlist but with the win is now recognized as among the world’s very best after just 10 pro fights.

The 23-year old Harper jumped out to a strong start, much to the delight of the boisterous and partisan crowd on hand. The former amateur standout—a three-time national champion in the non-paid ranks—worked her jab and landed in combination against Wahlstrom, whose determination was evident but early offense all but absent. 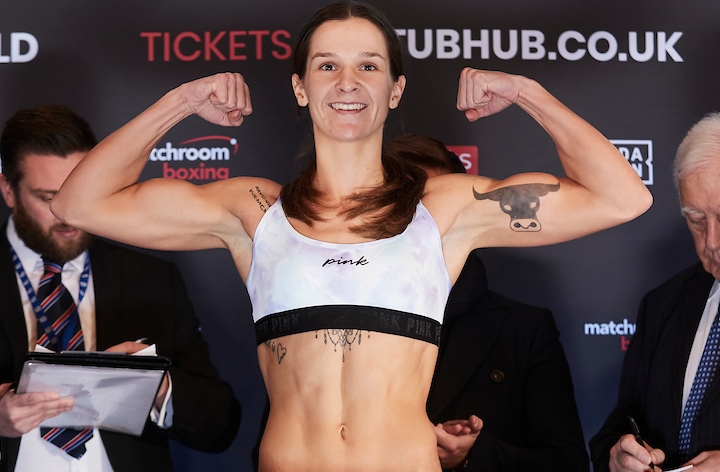 Wahlstrom adjusted in round two, bobbing and weaving Harper’s right hand but still not landing anything ofnote—or really at all. Harper stood her ground, effectively fighting on the inside even if not landing a lot of clean punches.

Round three saw Wahlstrom truly open up her offense for the first time in the fight. The defending WBC titlist landed a clean overhand right, which Harper took well and created just enough space to avoid the sequence from happening again. The unbeaten Brit pawed with her jab, keeping Wahlstrom on the outside.

A body shot by Wahlstrom caught the attention of Harper early in round four. Harper took the shot well, but left her guard down just low enough to get caught with a heavy jab which forced her to double step in place.

Harper came through with a major momentum shift after a competitive affair through six. A quick right hand by the unbeaten IBO titlist forced Wahlstrom to stagger and eventually touch down to the canvas. The Finnish fighter protested the knockdown call, perhaps out of denial as it came courtesy of a clean punch.

Riding high, Harper picked up the pace in round eight. Wahlstrom followed her challenger around the ring, only to get picked apart late in the frame as Harper landed in combination to draw a rise from the crowd who sensed a new queen was to be crowned.

Harper boxed smartly in the final two rounds, working the perimeter of the ring before drawing in Wahlstrom and catching her with a right hand on the inside. Wahlstrom offered one last rush in the final 30 seconds, but Harper was wise enough to smother her opponent’s punches in her best effort to not get caught with anything foolish.

It was enough to pick up by far the biggest win of her career, and with it the WBC junior lightweight title as Harper advances to 10-0 (5KOs).

Wahlstrom’s near five-year stay as a 130-pound queen comes to a close as she falls to 23-2-2 (3KOs). Her lone loss came above weight in a failed December 2018 title bid versus Irish superstar Katie Taylor, now the undisputed lightweight champion and pound-for-pound entrant.

The title fight served as the chief support to the ring return of local hero Kell Brook, as the former welterweight titlist faces Massachusetts’ Mark DeLuca (24-1, 13KOs) in a scheduled 12-round junior middleweight contest.

a star is born