Crawford issued a four-word Tweet on Thursday night directed at Tyan Booth. It read, “We do have passports.” The WBO welterweight champion added a winking emoji to his Tweet.

Crawford’s understandable reaction to Booth questioning his wife’s weight was well-received on Twitter, where countless fans and fellow boxers lambasted Booth for his crass comments. 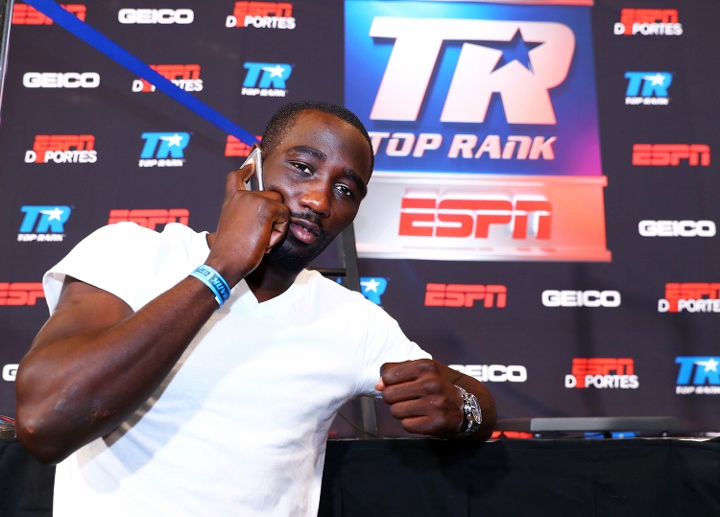 A day earlier, Booth asked this tasteless question about Crawford’s wife, Esha, on Twitter: Should a world champion boxer have a fat girlfriend? Booth’s Tweet was sent out with a picture of Crawford, dressed in a suit, posed with his wife, who wore a dress in it.

The 35-year-old Booth also is serving a British Boxing Board of Control suspension for his behavior outside of the ring.

Booth, of Nottingham, England, has gone 12-11-5, including two knockouts, during a pedestrian pro career that began in October 2005. The super middleweight hasn’t fought since he beat Marcus Morrison on points in their four-rounder 19 months ago in Derby, England.

The 31-year-old Crawford (34-0, 25 KOs) is preparing to head to Colorado Springs, Colorado, to start training camp for his April 20 fight against Amir Khan. The Omaha, Nebraska, native will defend his WBO welterweight title for the second time when he encounters England’s Khan (33-4, 20 KOs) in a 12-round, 147-pound title fight ESPN Pay-Per-View will air as a main event from Madison Square Garden in New York.

[QUOTE=Ake-Dawg;19497309]Obviously you are unfamiliar with the term "street justice". Twitter fingers Booth just might get introduced.[/QUOTE] Isn't Bud using "tweet justice" in retaliation? Anywho, these boxers are some small dudes. Not sure how they can do any damage when they…

[QUOTE=Curtis Harper;19499110]I hear Nebraska is the official gang bangers training grounds. Bud buried some fools out there. Seriously, Bud is vicious and cool. A nice combo.[/QUOTE] This post for some reason made think of that scene from the movie Belly…

[QUOTE=OgTripleOg;19497390]This is the British way, normally talk **** on a personal level. That stuff might fly over there but come here and talk that same talk. :boxing::boxing:[/QUOTE] I'm just waiting the thought police to arrest him in the UK for…

[QUOTE=turnedup;19497270]Some things are sacred in life and you don't EVER insult, threaten, or disrespect on any level. Mofo's get killed for less in the world.[/QUOTE] Going after a man's wife is what people in this world WILL GET KILLED over...…