It was business as usual for Crawford, who landed 48% of his power punches after landing 48% in his last 10 fights. 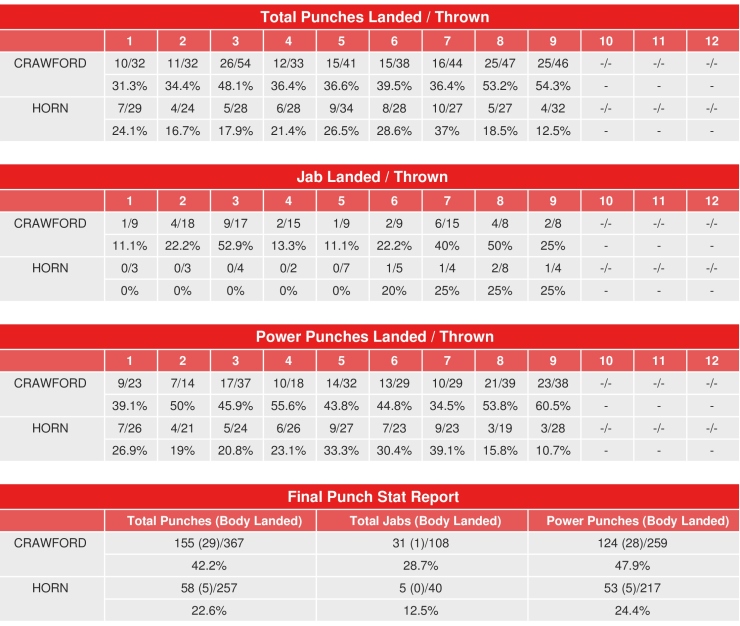 America's Crawford, the former undisputed super lightweight world title holder, outclassed the Aussie who was defending the title he won in a huge upset of Manny Pacquiao in July of last year in Brisbane.

Horn defended the belt with a technical knockout of Gary Corcoran in December, but he was dominated by Crawford all the way at the Grand Garden Arena in Las Vegas.

Crawford, who improved to 33-0 with 24 knockouts, battered Horn for eight rounds, knocking him down in the ninth with a flurry of blows.

Horn beat the count, but Crawford unleashed another barrage and referee Robert Byrd called a halt at 2:33 of the round.

With the win Crawford claimed a world title in a third weight division.

A former WBO lightweight world champ, Crawford made the move up to welterweight in impressive fashion.

He won every round and was never really hurt by Horn, who fell to 18-1 with one draw and 12 knockouts.

A vocal Australian contingent among the crowd of 8,112 lustily backed Horn, but he was in trouble from the start as Crawford caught him with a hard left just seconds in.

Crawford, using his speed and his ability to switch stances to good effect, landed almost at will, Horn absorbing the punishment without finding a way to answer.

Crawford needs to retire Old Pacquiao to be PPV material.

Horn landed 15 percent against Pac 23 percent vs Crawford He actually was more accurate against Bud, and still got crushed :bottle:

I felt bad for Horn during that fight

I don't want spence/crawford next.. too much of a fan of both.. but so was I with AJ/Wilder.. until AJ started acting like a chickensh*t b*tchmade princess.. I turned on him.. same way I turned on Wilder when he didn't…

[QUOTE=Zaroku;18848081]The avergage level of iq, of fatherless children on this site, no racial slurs intended, but why do none us born people in my experience make me smile. make me believe.. you got more [B]common sense[/B] than Americans, without a…