Lopez realizes Garcia has been smart and proactive about using his status as an influencer to help build his boxing brand. Garcia, who has 5.9 million followers on Instagram and over 373,000 on Twitter, also has proven he can sell tickets in Southern California.

The unbeaten IBF lightweight champion just doesn’t think that the 21-year-old Garcia deserves much praise for what he has accomplished in the ring thus far. Even Garcia’s back-to-back first-round knockouts of Romero Duno and Francisco Fonseca haven’t swayed Lopez’s opinion of him.

“I haven’t been impressed by Ryan Garcia at all,” Lopez told BoxingScene.com. “But I feel like if he beats Linares in good fashion, then I’ll take my hat off to him. I’ll be like, ‘OK, he got a little something.’ But it still won’t faze me. The thing is they put these kids up there fast, and I get it. They’ve gotta take care of them, they’ve gotta get them in fights and they’ve gotta make it look good. That’s what matchmakers do.

“But Ryan Garcia, to me, is Oscar De La Hoya without the skills. He has a fan base, he has the platform, he has everything he needs. The only thing he doesn’t have is the skill set. He’s not that great.”

De La Hoya, whose company promotes Garcia, became a superstar in the 1990s, long before social media existed. Known by mainstream American sports fans from the time he won a gold medal at the 1992 Summer Olympics in Barcelona, De La Hoya amassed accolades and fans at a rapid rate.

The East Los Angeles native won his first world title in just his 12th professional fight and became a champion in five additional divisions. Before Floyd Mayweather Jr. defeated him by split decision and surpassed him by a bigger margin as an earner, De La Hoya was boxing’s biggest pay-per-view star outside of the heavyweight division.

“The Golden Boy” believes Garcia (20-0, 17 KOs) can attain comparable stardom if De La Hoya and his matchmakers move the Victorville, California, native at an appropriate pace.

They expect to match Garcia against former WBA/WBC lightweight champion Jorge Linares in Garcia’s first fight after the coronavirus crisis ends. Garcia was supposed to face Linares on July 11 at Staples Center in Los Angeles, but their fight has been delayed indefinitely due to the COVID-19 pandemic. 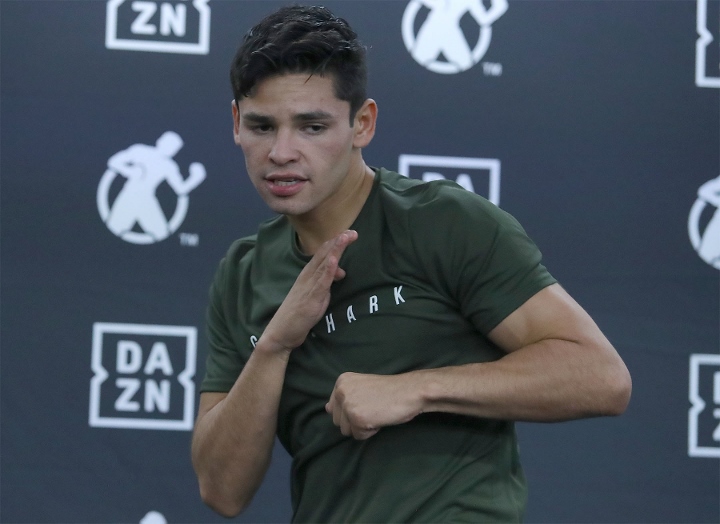 Venezuela’s Linares (47-5, 29 KOs) has been beaten by technical knockout five times in his career, but the 34-year-old ex-champion is skillful, strong and much more accomplished than anyone Garcia has faced thus far. The hype surrounding Garcia notwithstanding, Lopez doesn’t place him on the same level as young, elite lightweights like him, Devin Haney and Gervonta Davis.

Lopez (15-0, 12 KOs) earned his shot at three-division champion Vasiliy Lomachenko (14-1, 10 KOs) by demolishing Ghana’s Richard Commey to win the IBF 135-pound championship in his last fight. Commey (29-3, 26 KOs) had lost only a pair of 12-round split-decisions to Robert Easter Jr. and Denis Shafikov before Lopez dropped and stopped him in the second round December 14 at Madison Square Garden in New York.

The 22-year-old champion pointed out that Garcia doesn’t have anything resembling that knockout of Commey on his record.

“I’m gonna be real – I don’t take anything away from the kid,” Lopez said. “He’s still learning, he’s still doing good, he’s still trying to do his best. But they’re setting up these guys with opponents that are ranked 50th or ranked 20-something in the lightweight division. It’s sad. It’s like, really?”

Garcia drew rave reviews for his one-punch, first-round knockout of Nicaragua’s Fonseca on February 14 at Honda Center in Anaheim, California. That impressive performance occurred three months after Garcia knocked out the Philippines’ Duno in the first round November 2 at MGM Grand Garden Arena in Las Vegas.

Those wins were evidence of Garcia’s improvement since he began working with Eddy Reynoso, who also trains Canelo Alvarez. Golden Boy Promotions’ marketing of those fights still impressed Lopez more than Garcia’s actual victories over Duno (22-2, 17 KOs) and Fonseca (25-3-2, 19 KOs).

Lopez contends that Las Vegas’ Haney and Baltimore’s Davis view Garcia as an exploitable, popular potential opponent that can make them more marketable, not a true threat to their unblemished records.

“These guys are smart,” Lopez said. “They go out there and go after Ryan Garcia because they know he isn’t as good as people think he is. But he has the followers, so they’re just clout-chasing. That’s all they’re doing, clout-chasing and trying to stay relevant as much as possible. Devin Haney goes up on the stage, sees Ryan Garcia win his fight and goes up and tries to call him out right there. These guys are desperate, man. They’re desperate to make a name. They’re desperate to do something. Hey, whatever you’ve gotta do to make a name, by all means, do it. I’m not the type of fighter to do that. I’m not the type of fighter to chase.”