Teofimo Lopez: Lomachenko Is On His Way Out, I'm Looking Through Him

Teofimo Lopez Jr. is under the impression that Vasiliy Lomachenko is giving it one last hoorah as a lightweight before stepping down in divisions.

The 23-year-old Lopez Jr. (15-0, 12 KOs) and Lomachenko (14-1, 10 KOs) will meet in a lightweight unification clash Oct. 17 on ESPN, and the Brooklyn-based IBF champion is predicting the Ukrainian is not long for lightweight if he defeats him.

“Lomachenko knows he’s on his way out. Nobody knows that, but I do. Why would he come to 135? He’s here to cash out. Come on; you get fooled by what you see,” Lopez Jr. told Fight Hype. “Because if it doesn’t work, he still has a plan B … You guys all believe it, and it’s like an illusion to you guys. You’ve got to look at why this guy is going to 135. This is not his weight class. I’m going to do my thing on Oct. 17, clean my hands and keep rolling.

“And I’m not looking at Lomachenko. I’m looking through him. What happens if Teofimo takes him to deep waters? My main priority is the person I’m facing.” 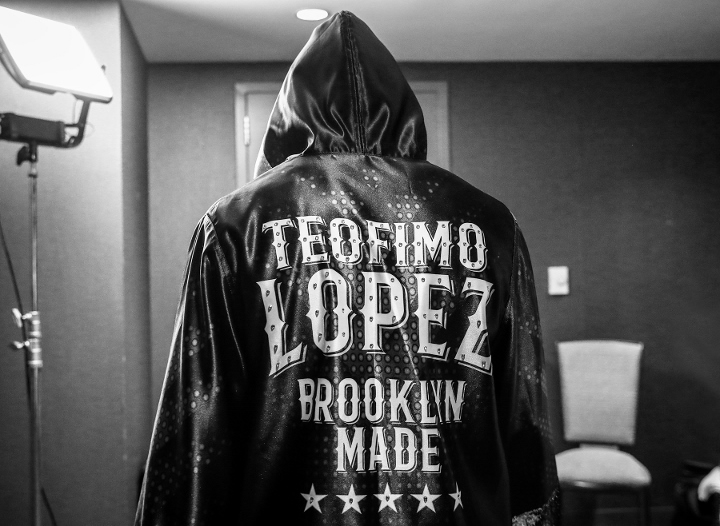 The WBO, WBA and WBC lightweight franchise champion Lomachenko, 32, has long expressed that competing at 135 pounds is not his preferred choice.

The two-time Olympic gold medalist has consistently given up size during his four lightweight clashes, and he’ll be doing the same against the bigger and younger Lopez Jr.

The three-division champion Lomachenko gave up two inches in height and 5 ½ inches in reach against Luke Campbell last September in a competitive unanimous decision win at the O2 Arena in London.

Lopez Jr. was not particularly impressed with the performance, even calling Lomachenko a “little diva.”

“He’s desperate, he had to make a statement [against Campbell],” he said. “He made between $4 to 6 million against Luke Campbell out there in the UK, and that’s because he went to the UK.”

Love Lopez but r u ****ing kidding me?!?! On his way out is a fighter like Kovalev, not Lomachenko. U're overly-confident & THAT is gonna get u into A LOT of trouble. Teo has great power but has yet to…

[QUOTE=Songbird;20768552]i don't think loma's even a popular fighter, i mean maybe the charlo's are more popular than him & all fighters have their fans that big them up, no news there is bumchenko in your p4p top 5?[/QUOTE] I'm going…

[QUOTE=1hourRun;20768532] However, I provide sound argument for my position, I think I'm making progress convincing a lot of members that this clown's iconic-persona has been manufactured to generate traffic for websites.[/QUOTE] i don't think loma's even a popular fighter, i…

[QUOTE=brown_knight06;20768478]How the fuq can you lomachenko a bum with a straight face?[/QUOTE] I usually have a grin from ear to ear. When assessing the privilege's Bumochenko has taken advantage of throughout his career to leave his mark in boxing history,…